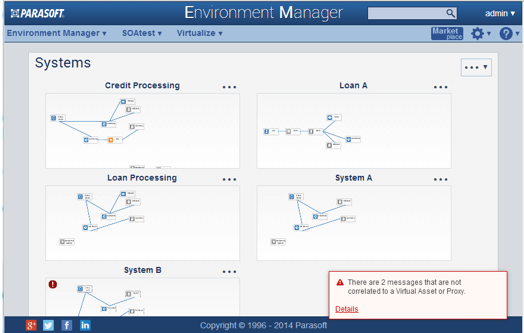 The ability to rapidly develop and continuously execute end-to-end tests—even in complex or frequently-evolving environments—is essential to accelerating application delivery while minimizing business risks. That’s why Parasoft allows users to create a simulated test environment in less than a minute, then immediately start defining and executing tests against the appropriate test environment configurations.

The Ingredients of the Virtual Lab

A real test lab requires the closest physical manifestation of the operational environment an application is planned to work in, but even in the most sophisticated lab, it’s difficult to scale to a realistic environment. A virtual lab fixes this problem. Virtual labs evolve past the need for hard-to-find (or perhaps non-existent) hardware/software dependencies with the us of sophisticated service virtualization with other key test automation tools:

Altering the data and behavior of dependent components

Service virtualization also gives you control over the behavior of the dependent components and the data they receive and return. It is very difficult to alter the configuration of the network or hardware associated with each dependent component of the AUT. It’s also quite common to face staged test environments that exhibit slower performance than you’d encounter in production.

Using service virtualization, you have greater control over how dependencies respond. This gives you on-demand access to a much broader range of dependency behaviors (just like a flight simulator). As a result, you can assess the risk of a release candidate faster and more accurately.

For example, you can simulate different dependency behavior to:

Virtual services do not need to always respond with the actual data in the real system. In fact, there are many benefits to providing unexpected data from your virtual services. Virtual services are separated from their data sources, which allows much greater flexibility in generating response data that suits different teams needs, such as:

By simulating the different service data in these types of situations, you can gain much more flexibility with your testing.

Get detailed write-ups at Programmable Web and SD Times.

To learn how this release can help your organization enable continuous testing and significantly expand test coverage and traceability with new functionality such as: