Why API Integrity Is a “Must-Have” in the API Economy 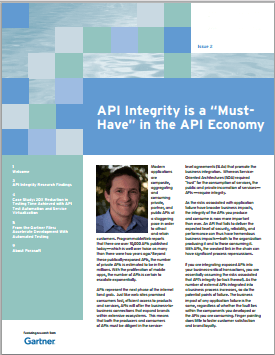 Modern applications are composite — aggregating and consuming private, partner, and public APIs at a staggering pace in order to attract and retain customers. Programmable Web reports that there are over 22,000 APIs published today (updated January 2020.) Beyond these publicly-exposed APIs, the number of private APIs is estimated to be in the millions. With the proliferation of mobile apps, the number of APIs is certain to escalate exponentially.

APIs represent the next phase of the internet land grab.  Just like web sites promised consumers fast, efficient access to product and services, APIs will offer the business-to-business connections that expand brands within extensive ecosystems.  This means that both the producers and consumers of APIs must be diligent in the service-level agreements (SLAs) that promote the business integration.  Whereas SOA required “trust” for the consumption of services, the public and private incarnation of services—APIs —require integrity.

As the risks associated with application failure have broader business impacts, the integrity of the APIs you produce and consume is now more important than ever. An API that fails to deliver the expected level of security, reliability, and performance can thus have tremendous business impacts—both to the organization producing it and to those consuming it.  With APIs, the weakest link in the chain can have significant process repercussions.

If you are integrating exposed APIs into your business-critical transactions, you are essentially assuming the risks associated that API’s integrity (or lack thereof). As the number of external APIs integrated into a business process increases, so do the potential points of failure. The business impact of any application failure is the same, regardless of whether the fault lies within the components you developed or the APIs you are consuming. Finger pointing does little to foster customer satisfaction and brand loyalty.

If you are exposing an API, the assumption is that it will work as described. Once the organizations consuming that API integrate this exposed functionality into their own applications, API failure jeopardizes the transactions that now depend on this functionality. If your API is popular, you can guarantee that a glitch will make the headlines. The more secure, reliable, and dependable your API, the better the chance of consumption and the greater the potential for business expansion. If you’re providing a questionable interface and there are viable alternatives to your API, you’re likely to lose business since switching costs associated with API integration are so low.

APIs are great because they represent building blocks that developers can use to easily assemble all sorts of interactions without having to rewrite an interface every time they need machines to communicate. Additionally, since APIs have contracts, applications that want to communicate with each other can be built in completely different ways, as long as they communicate in accordance with the API contract. This allows different developers from different organizations in different parts of the world to create highly-distributed applications while re-using the same APIs. Without testing, it’s difficult to ensure API integrity.

What Is API Testing?

So how do you perform API testing? What does it entail? How to API test? Unlike the user, who interacts with the application only at the UI level, the developer/tester must ensure the reliability of any and all underlying APIs. Without testing the APIs themselves, developers and testers would be stuck manual testing, just like a user, testing the application at the UI level, waiting until the entire application stack is built before being able to start testing.

You can perform automated API testing by testing the application at the API level, designing test cases that interact directly with the underlying APIs, and gaining numerous advantages, including the ability to test the business logic at a layer that is easy to automate in a stable manner. Unlike manual testing, which is limited to validating a specific user experience, API testing gives you the power to bulletproof your application against the unknown.

As APIs grow in popularity to enable a broader array of online and mobile functionality, organizations must ensure API Integrity.  With APIs as an enabler of—and potentially the weakest link in—critical business transactions, leading enterprises are recognizing that it’s time to move beyond typical ad-hoc API testing and evolve a trusted, continuous testing process. Ultimately, leading organizations are finding that an enterprise-grade solution for hardening back-end services is now a “must have” for ensuring the security, reliability, and performance of critical transactions in today’s API economy.