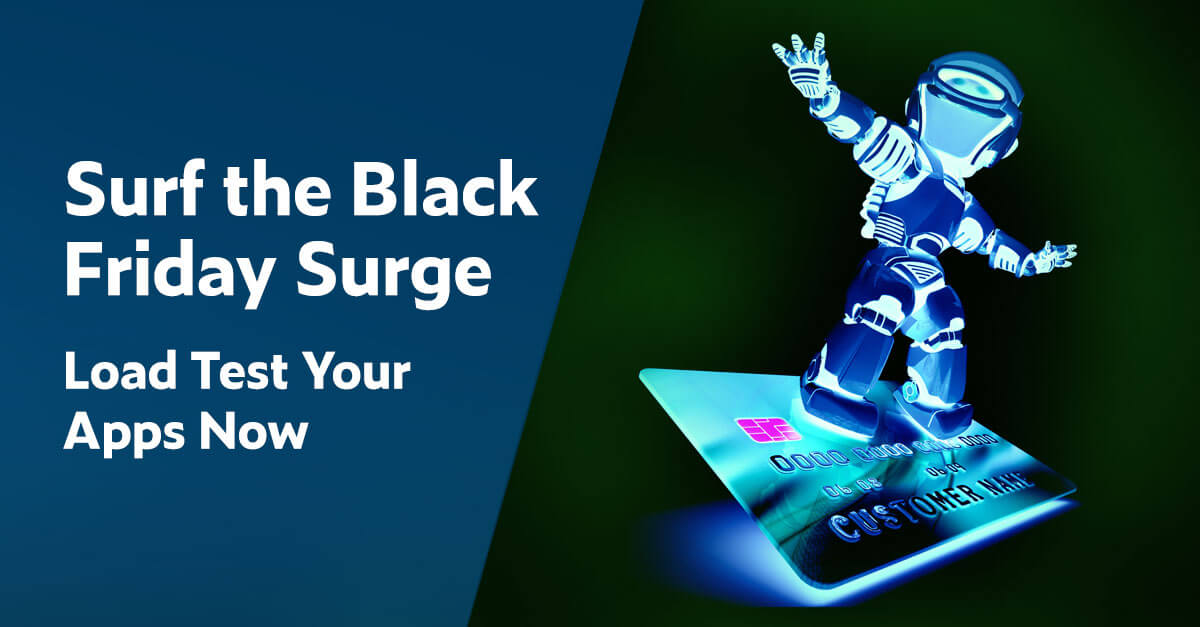 Surf’s up, dudes and dudettes! Did your application stay on top of the e-commerce wave during Black Friday in July? The holiday shopping-inspired rush of Black Friday and Cyber Monday is rapidly approaching.

Don’t get rolled in the undertow while your competitor stays on top and surfs that righteous wave of business! You’ve planned and scheduled to test your apps and your website to withstand a sudden spike in traffic, but have you ensured that all your subsystems and dependencies are ready as well?

Are those dependencies at your disposal now for full end-to-end testing? Or do the associated costs for the availability of dependencies prevent you from completely covering your assets and ensuring you’re prepared? If you’re dealing with any of these situations, then this blog post and this webinar are for you.

Due to these factors, some companies are discouraged from application performance testing at all. A fatal mistake.

Performance testing often requires specialized skill sets and infrastructure that can be costly to organizations. To make load testing feasible, the need arises for a low-code/no-code way to easily create or leverage existing tests for API performance testing.

Performance testing often falls within a no man’s land area, where teams have limited knowledge of the API or its usage to properly test it. Complexity arises when performance testing teams have to coordinate with the development teams to construct proper testing scenarios. Again, they’re faced with the specialized skill set issue. Also, nonstandard messaging protocols create difficulty testing applications with multiple dependencies across.

In traditional performance testing, once testing is complete, correlating all the issues that arose in order to send them back to development is a nightmare. Then linking what went wrong to which user stories can be immensely problematic without an end-to-end solution such as the Parasoft Continuous Quality Platform. Because teams often delay performance testing to late in the SDLC, when managing remediation as deadlines loom, everything becomes a fire drill.

The Low-Down on Load Testing

When it comes to software quality, it’s important to recognize that a regression related to performance can be just as much of a concern as a functionality regression. This is most evident in the retail and e-commerce space at peak buying seasons, such as the post-Thanksgiving weekend in the United States.

Businesses that want to ride the surging waves of the holiday online shopping seasons will ensure load and performance testing is included as a part of the DevOps workflow in the CI/CD pipeline. It’s the best way to avoid application crashes due to unexpected loads and increased activity levels.

Be sure to allow sufficient time in your sprint schedule to do thorough load testing before it’s time to release to production. If your application relies on backend services or systems that impede testing early, you can use service virtualization where appropriate to simulate inaccessible, costly, or not yet developed or deployed dependencies.

Want to talk to an expert about load testing?

Watch Surf the Black Friday Surge With Software Load Testing to learn what it takes to perform load and performance testing on your web application. You’ll see how you can use key aspects of Parasoft Load Test to emulate the traffic loads of hundreds or even thousands of virtual users, assigning specific tasks to each group of user types.

Want to replicate 500 shoppers adding to cart and then checking out? How about another 1,000 just shopping without completing a transaction? Load Test is your solution.

Learn what you can do to deploy load testing in your own environment, identify potential system or API performance issues, and remediate them earlier. Here’s what I’ll show you in the webinar:

With these tips and techniques, you can ensure that your applications will meet performance expectations and avoid software wipeouts over busy holiday shopping periods.

For a limited time, Parasoft is offering a 3-2-1 performance testing special. Just in time to get your web applications prepared for Black Friday/Cyber Monday! The special includes:

Parasoft’s exemplary professional services team will analyze your specific testing needs and assist in establishing two performance testing scenarios that optimize Load Test for your business. Your expert will then be available to answer questions and assist for three months while you ensure your applications are ready for the holiday rush.

Your expert will also instruct your staff on how to virtualize one backend dependency, which offers several advantages, including:

Book an Appointment Now
Written by