When the news about the OpenSSL Heartbleed vulnerability was released, the industry went into a panic about how to either patch or mitigate the problem. OpenSSL is an encryption library used in HTTPS communication. HTTPS is supposed to be the secure version of HTTP, so a wide variety of private information going over the wires of the internet first line of protection is OpenSSL. As such the Heartbleed vulnerability put credit cards, social security numbers, passwords, and other personal information at critical risk.

The vulnerability was caused by the rarely used but frequently enabled “heartbeat” feature of OpenSSL. By sending a server running OpenSSL a malformed heartbeat request, a memory over read occurs which leaks critical information into the response packet. When properly weaponized, this allows nigh undetectable exfiltration of private OpenSSL, which compromises all of the server’s secure communication.

As organizations realized that this issue was real, they wanted to check if the problem existed in their own source code. At the simplest level you can patch or update an old version of OpenSSL. But you may also want to test to make sure that the underlying problem itself doesn’t actually exist. Let’s see how runtime error detection can be used along with traditional penetration tools to precisely detect vulnerabilities.

Parasoft Insure++ is a memory debugging tool that uses patented instrumentation techniques to quickly identify leaks and other memory issues. Detecting memory over reads are incredibly difficult (if not impossible) with traditional debuggers, but extremely easy using Parasoft
Insure++.

Since the core of Heartbleed is a memory over-read issue, we’ll be using Parasoft Insure++ to demonstrate on a real-world vulnerability how much easier it is to diagnose and fix critical bugs with the right tools!

Getting Started: Setting up the victim virtual machine

When setting up the virtual machine’s networking, be mindful of where you’ll launch the attack from. I chose to attack from the host machine so I included a host-only network adapter. Install Metasploit on the machine that is going to be performing the attack.

The project will be laid out as follows:

Building OpenSSL with Insure++ and installing.

The next thing we need to do is configure our source. In order to expedite this process we’ll create the following script in the OpenSSL source directory. The script assumes that both insure and gcc are included in the current shell PATH. Name the script something like configure_openssl.sh

flag configures OpenSSL to install to this directory.

Now run ~/configure_openssl.sh in the OpenSSL source directory to configure the source.

The next step is to compile using make. Make accepts a -j flag to specify the number of compilation jobs to run in parallel. Insure++ fully supports this parallel compilation which allows us to speed up compilation by specifying the number of cores available to the victim virtual machine.

When running make with Insure++ instrumentation, an Insra window will appear showing which files are being instrumented during compilation. 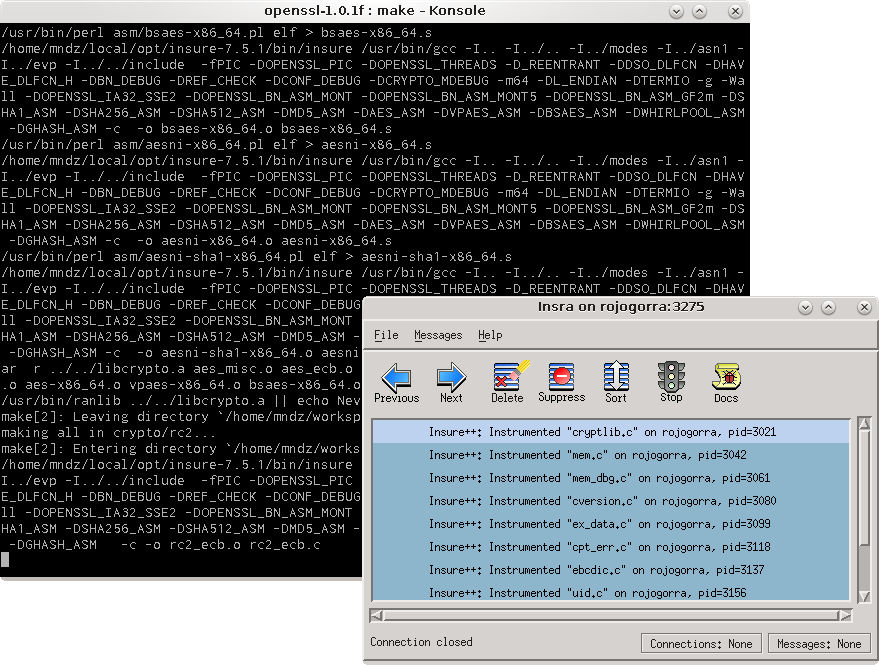 Normally we would run make install after building but there is a problem with man file creation due to the old version of pod2man included with CentOS 7 not supporting the format used by OpenSSL. To avoid this we install only the software instead of patching many POD files by hand.

We’ll get the source code of a recent version of LigHTTPD to build.

Before running this configure script be sure to install the bzip2 headers required for LigHTTPD.

Run the script from the LigHTTPD directory.

Now that the source is configured we must perform one unusual additional step. Since LigHTTPD uses libtool for library linking we must configure it to use Insure++ for the final linking step.

Now that the source is configured we can proceed to build the source code
and install.

Now that we have LigHTTPD built with an Insure++ instrumented OpenSSL, we need to create a bare bones setup for LigHTTPD to run. First we create a simple “Hello world!” HTML page in /home/USER/heartbleed/srv/index.html~ as follows…

The next setup in setting up is to generate a SSL PEM file for LigHTTPD to
use for HTTPS.

Be sure to fill out the email address, physical location, and organizational fields as show above because we’ll look for them in leaked memory later!

Finally, we create a simple configuration file at /home/USER/heartbleed/lighttpd.conf as follows. Be sure to correct the user, groups, and paths to match your setup. Note that we’re using the non-standard ports 8080 for HTTP and 4443 for HTTPS to avoid having to run LigHTTPD as root.

Create the following script in /home/USER/heartbleed/run_lighttpd.sh. We need to specify the LD_LIBRARY_PATH since we’re using non-standard paths for libraries. Be sure to correct the path to match your users home folder.

Run the script to launch LigHTTPD!

Now that we have LigHTTPD up and running with our Insure++ instrumented OpenSSL, it’s now time to launch our attack! We will use Metasploit to launch our attack. Metasploit is a tool for many information security tasks including exploiting and bypassing software security. It includes a scanner for Heartbleed which partially exploits the vulnerability to demonstrate
susceptibility.

The first thing you need to do is install Metasploit on your attacker system. I chose to launch my attacks from the virtual machine host so I installed Metasploit there. I will not cover Metasploit installation since it is out of the scope of this demo. After Metasploit is installed launch
the Metasploit console.

This will display a prompt for the Metasploit framework. From this prompt let’s search Metasploit for what Heartbleed tools it provides.

We will be using Metasploit’s Heartbleed scanner mentioned earlier.

From here we want to set the options for the openssl_heartbleed scanner. First we will turn on verbose output to see detailed output during exploitation. Then we set the remote host IP and port to target for attack. Be sure to change the host IP and port to match your setup.

If we run set without any arguments we can see what arguments have been set for the current tool. It is important to check these options before launching a scan or exploit in Metasploit because targeting the wrong system could disrupt or damage unintended targets.

Now that we’ve configured all the options and confirmed we’re not attacking something we did not intend to, we can launch our attack!

The line after ‘Printable info leaked:’ has been removed since it is extremely long. Some relevant bytes are presented below:

As you can see, the exploit successfully leaked memory from OpenSSL containing our PEM key! If you search through the leaked memory you will find the email address, physical location, and organizational information you filled out when creating the PEM file that LigHTTPD uses.

From our victim virtual machine we an see Insure++ output in Insra when we launch LigHTTPD. During initial execution a USER_ERROR occurs which we will ignore since it has nothing to do with Heartbleed. 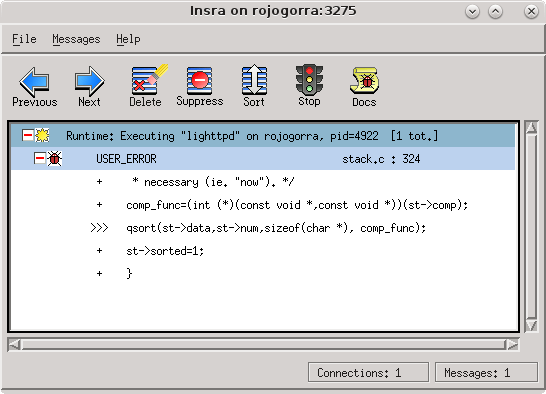 After running the Heartbleed exploit in Metasploit we can see the exact line of code where the the buffer over-read occurs that causes internal memory to leak! 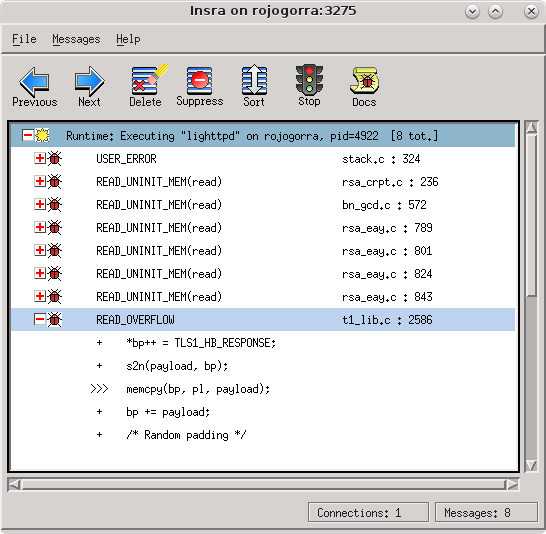 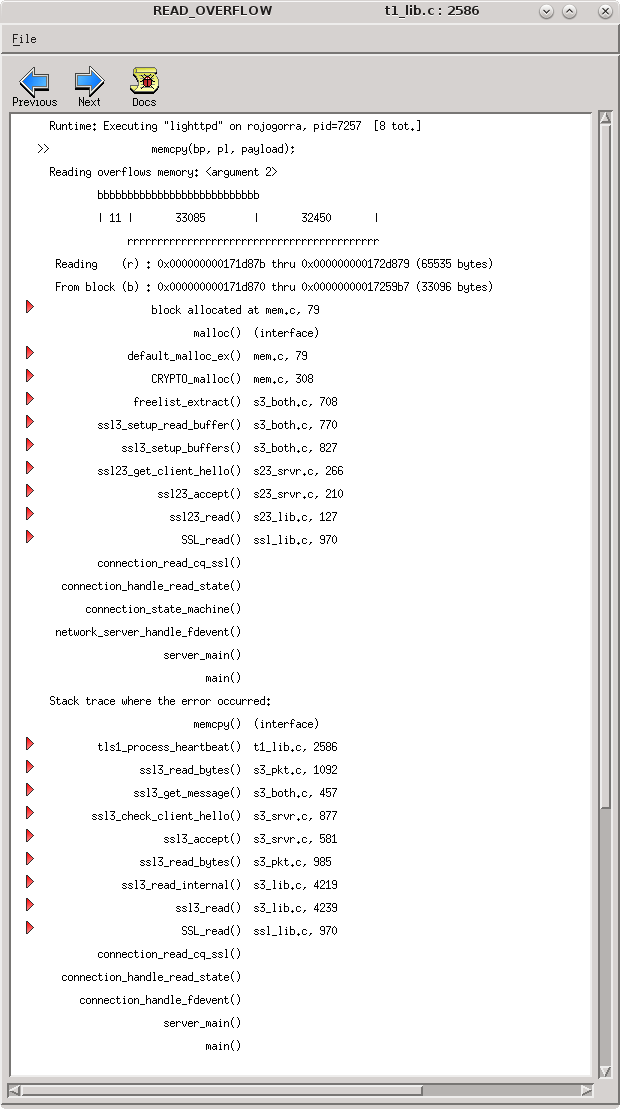 Executables instrumented with Insure++ generate a tca.log file when run. TCA stands for ‘total coverage analysis’. We can open this log file with the TCA tool included with Insure++ to see detailed information about our code coverage.

In the next screenshot you can see TCA displaying the results of our tca.log obtained after running the Metasploit Heartbleed exploit. I sorted the report by file and highlighted t1_lib.c where the vulnerability exists. As you can see we only covered 13% of the code in the file.

Double clicking on the t1_lib.c line will cause another window to open. In this window we can see coverage in t1_lib.c sorted by function. I have highlighted the function where the Heartbleed vulnerability occurs. As you can see we only covered about 45% of the code in the function. 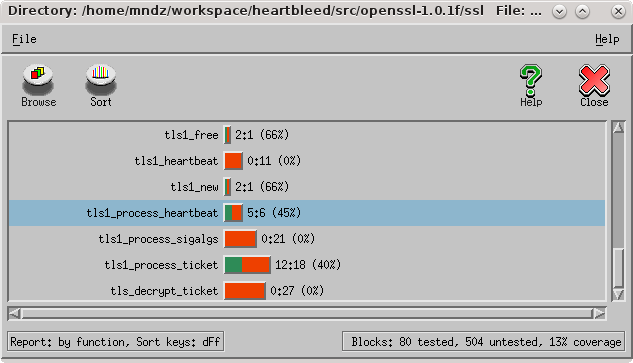 Furthermore, double clicking on the function name displays the source code with code that was covered in black and code not covered in red. 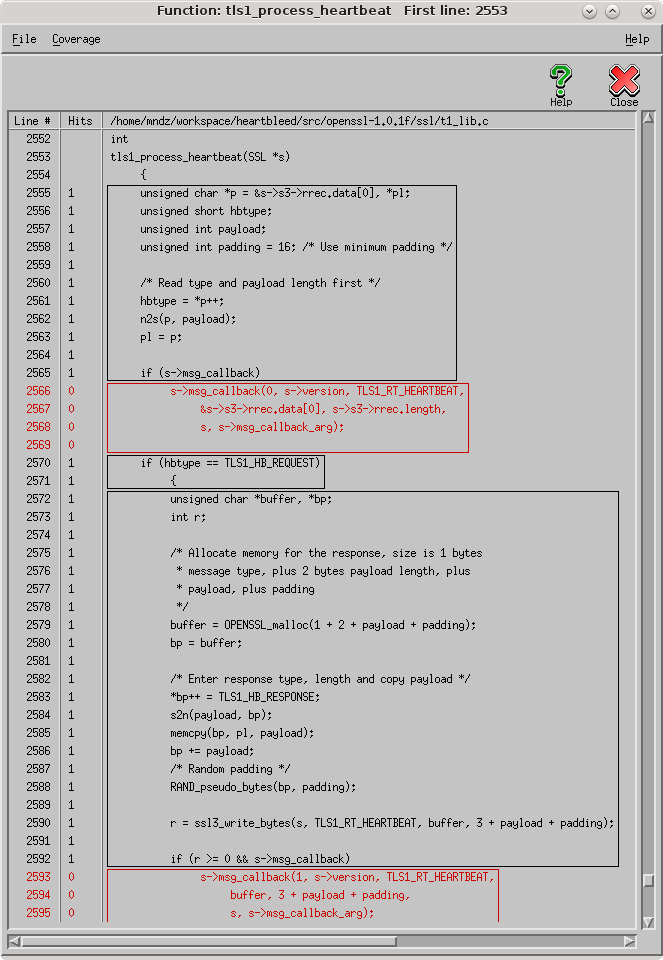 As you can see, Parasoft Insure++ made detection of Heartbleed trivial. Not only did Insure++ detect the memory over read, but it also generated:

These features make Insure++ something that would fit well in any information security researcher’s tool belt. So while you’re probably familiar with using various SAST tools and penetration tools to find security vulnerabilities, you should think about adding runtime error detection to your security testing toolkit.