Without an enterprise-level automated solution for ensuring the integrity of APIs and API-driven composite applications, organizations risk:

With ad-hoc API testing efforts, no formal process or tool is used to unit test or exercise the API. It is assumed that the API is exercised via manual testing of the UI. Ad-hoc API testing characteristics include:

Any pockets of maturity at this point are based on the experience and initiative of individuals. There is no centralization of assets; it’s every man for himself. Along the same vein, testing assets are typically created as one-off solutions and stored on a local machine, inaccessible to anyone but the creator. There’s no test automation here; it’s all manual, ad-hoc execution. Organizations are driven to move to a mature level of API testing when: 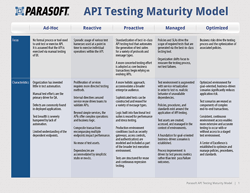 This is just a brief introduction to the two extremes of API testing maturity. Most organizations today fall somewhere in between these two polar extremes.

Parasoft has developed an API Testing maturity model that provides a detailed look at the 5 different levels of API testing: Ad-hoc, Reactive, Proactive, Managed, and Optimized.

If you want to assess where your organization currently stands and see what’s involved in moving forward, download the complete API Testing Maturity Model.

If you’re exploring API Testing, Parasoft has prepared a list of key API Testing resources that our customers have found helpful at the early stages of the API testing solution research/evaluation process: