Today’s distributed software environments incorporate a variety of APIs with every interface your software touches, from mobile to microservices. Each API has to be continuously tested and verified to ensure your software functions as it should. Parasoft’s API testing platform makes quick, efficient, and intelligent work of such requirements.

What Is an API?

API stands for application programming interface. An API is a software intermediary, or go-between, that enables two apps to communicate with each other. For example, every time you interact on Facebook, purchase a product on Amazon, or check the news on your phone, APIs are at work.

An API operates like this: when you utilize an application on your computer or phone, the app connects to the Internet, sending your data to the server. The server downloads the information, interprets it as needed for the app, then returns a response to the phone or computer in a way that you can understand and use it.

What Is API Testing?

The reason testers test APIs is to find out if the APIs meet expectations for functionality, security, performance, and reliability. API functional testing is essential because APIs are the primary interface in application logic and because testers have found that GUI tests (graphic user interface tests) are challenging to maintain and provide limited coverage, taking into consideration the recurrent changes in DevOps and Agile software and abbreviated release cycles. Companies have found that adding API testing significantly expands their application test coverage.

Testers test APIs directly, in other words, in isolation, as a component of end-to-end testing in integration testing. Outside of RESTful APIs, transactions include various endpoints, for example:

Testers test APIs that a development team produces. In addition, they test the APIs the team uses in the application, including any third-party APIs. The tests determine if the APIs return the appropriate responses in the correct format for a wide range of conceivable requests and if the APIs react appropriately in unusual or extreme inputs and to failures. Testing normally includes SOAP web services or REST APIs with XML or JSON message loads with the system sending over JMS, HTTP, HTTPS, and MQ. Other message formats testers use during tests are EDI, FIX, and SWIFT.

For details about the specific tests that developers use to test APIs, see the Types section below.

The Benefits of API Testing

Machine-to-machine and headless communications are standard in modern software architectures, as are associated application programming interfaces. This means practically every industry that runs on software benefits from using API software testing to ensure functionality to verify correct operation.

APIs are complicated. That means testing them can get complicated too, often requiring extensive technical know-how. But you want your developers to develop, not spend time creating test cases. Parasoft’s automated API testing platform has an easy-to-use, GUI-driven interface that needs no scripting, enabling less experienced testers to create comprehensive test case scenarios.

Some tools test just APIs. Others test just UIs. You no longer need a piecemeal approach to ensure that every aspect of your software development process is covered. The Parasoft continuous quality platform tests from start to finish — from unit tests to API, UI, and more. You get comprehensive coverage and seamless collaboration.

With the massive number of moving parts that API testing involves, you want to know which changes have the greatest impact and which ones to work on first. Parasoft’s AI and machine learning-driven API testing platform generates meaningful and comprehensive test scenarios correlated to the application code. When change occurs, Parasoft identifies which tests need to run to validate only the modified code, to avoid expending unnecessary time and effort.

APIs change. When such changes go untested, your applications behave in unexpected ways. You spend too much time pinpointing the problem and updating your library of dependent test case scenarios. Parasoft’s API testing platform continuously and intelligently monitors for change so your application is always verified and your test suite is always up to date. Smart Test Execution identifies which tests align with the code changes so you can optimize testing workflows.

One Testing Tool Covers All Your APIs

Yes, you have to test every API interface. The problem: every API has its own unique way of communicating with a dizzying array of messaging formats and protocols. Ensuring functionality for every permutation and combination can be a massive time sink. Parasoft’s automated API testing platform covers the widest range of messaging protocols and formats in the industry. They are fully extendable to cover proprietary formats or custom protocols. 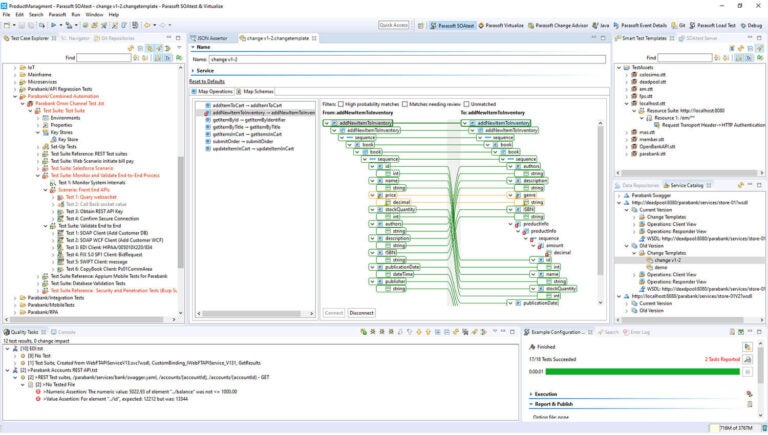 Parasoft’s API testing platform enables you to proactively manage change by automatically monitoring APIs and services and visually highlighting where updates have occurred.

In order to cover all the bases, testers employ a range of tests to test APIs. Here are the main ones.

API functional testing verifies that the API performs as expected and responds appropriately to any requests that it receives.

During this test, testers discover whether users with little API expertise can gain access to the full API including information about processes, functions, and resources.

UI testing tests the API’s user interfaces. It focuses mainly on the interface that connects with the API as opposed to the API testing itself.

This type of testing verifies that the app performs correctly under both peak and normal data inputs.

This test relates to the API’s actual operation, focusing specifically on the outcome of when the APIs utilize the API codebase. It concentrates on one or more of these: execution errors, monitoring, error detection, resource leaks.

This testing is essential and happens in the final steps of the development. It confirms various features and the correct behavior of the product and also efficiency.

This testing is for API protection and confirms that the API application is safe from external threats. It includes testing the structure of access control, user rights management, validating encryption methodologies, and authorization validation.

This is another security test. Testers input a large amount of miscellaneous data (fuzz or noise) into the system to force negative behavior or program crashes. These tests stress APIs for worst-case situations. 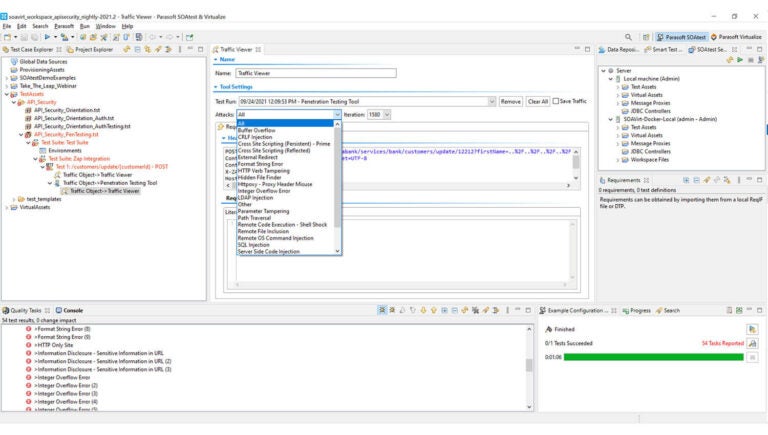 1) Test a wide span of corner cases and conditions and use automated validation extensively.

A high level of automation provides an array of functional test scenarios which you can replicate systematically.

Use an intuitive interface to automate complicated cases over databases, microservices, the messaging layer, etc. This includes:

2) APIs continually change, which presents risks in security and quality for companies that don’t keep up.

The key is to develop a system that assesses changes needed for current tests and then updates them or even creates new tests. This can substantially reduce the time and effort it takes to be sure that your tests do not fail as a result of unexpected changes and that they don’t ignore new functionalities.

These resources might be web services, databases, mainframes, or third-party applications, among others. You can use web service virtualization together with OS and hardware virtualization to gain access to the required environments. Combined, this allows you to test faster, earlier, and more thoroughly.

You can apply service virtualization in two ways with regard to API testing:

APIs are highly exposed. Thus, a great potential for volatile and unpredictable traffic exists. It’s wise to use broad performance testing to determine if your API meets expectations when it encounters surging demand or erratic behavior. Here are some examples.

Service virtualization allows you to create simulated test scenarios that assist you in testing various performance environments that are normally problematic to create in a test situation. You can test conditions like timing, delay, and latency to replicate typical, peak, and slow performance in an effort to plan for a cloud burst or someone accessing the API from a remote location on another continent.

In addition, you can create various failure and error situations that testers often find hard to reproduce in the actual program – like if your APIs use Amazon Web Services, you can create a scenario that simulates a situation where AWS is offline.

You can also configure a wide range of situations in dependent systems in order to discover if your APIs deliver proper responses under non-ordinary conditions and also if they fail reasonably well.

You may replicate links to third-party applications, which can negate any risk your tests may have on services that you are not normally allowed to attack with test data or for which you are not budgeted.

APIs unfortunately offer a large surface attack area. To help stop attackers and major security problems, use a multi-faceted test approach. This ensures that you have written the necessary measure of security into the application. The approach includes:

Examples of When to Perform API Tests

Here are two examples of situations in which you would want to perform API tests.

When the user employs either of these two web sources, it’s understood that the app has an agreement with Facebook and Google, so the app can access some of the information about the user that she has previously supplied to the sources.

Testers can test the APIs that give the app the ability to access the information it needs. The tester can also test to make sure the social media app works with Facebook and Google successfully to give the user access to the app.

When a person uses a web service like Kayak or Expedia to book airline tickets, he anticipates that he’ll see cheap flights for the date he needs to fly.

The travel app has to communicate with the participating airline companies to show the traveler the best flight times and prices. APIs make this happen.

Testers can test to make sure the APIs that give the travel app the ability to communicate with the airline companies are working correctly and that the app is supplying the proper information to the user.

The testers can test to make sure the APIs that help book the flight are working as expected and verify the payment component – the tester can test the APIs that allow the app to communicate with credit card companies and properly process payments, and those APIs that keep the user’s personal and financial data safe.

How to Get Started Testing APIs

Testing APIs focuses on ensuring that a development and QA team does what it is supposed to do, guaranteeing that applications perform and function properly, and are reliable and secure.

Get details and guidance on choosing the best API testing platform for your organization in the whitepaper, How to Choose the Right API Testing Solution. 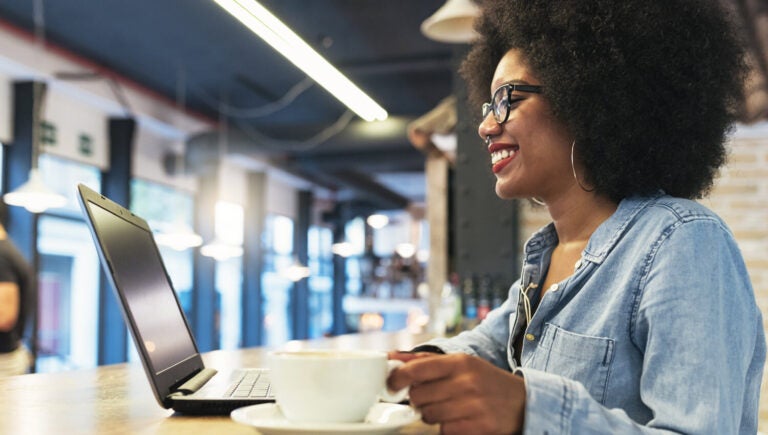 Parasoft’s API testing platform is widely recognized as best-in-class, with innovative tooling and broad support for over 120 message formats and protocols. With visual drag-and-drop tooling, users can create the most complex test scenarios without having to write a single line of code. Things like test flow logic, complex assertions, looping, data driving, and keyword association, such as BDD with Cucumber, can all be easily built with minimal technical experience.

Additionally, API test suites can be reused for nonfunctional validation, including load, performance, and API security testing. This increases application coverage and quality with minimal rework and effort.

Partner with Parasoft to improve your API testing.

Where do testers perform API testing?

Testers perform API testing almost entirely on an app’s business layer, between UI and data sources. Ideally, they test all of these layers.

What are the limitations of API testing?

No major limitations exist but you need to have a good API testing skillset to be a tester.

How is API testing performed?

How to Choose the Right API Testing Solution

Take the Next Step

Learn how Parasoft can help you improve your API test quality.