How to Make Software Testing Faster and Cheaper

A recent survey asking software developers, testers, and performance test engineers a series of questions about their access to test environments found that: 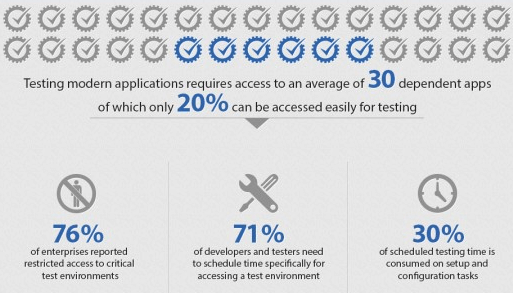 Why are so many organizations taking their chances with quality rather than providing unconstrained access to the environments required for effective testing? One key factor could be the exorbitant costs and complexity traditionally associated with today’s test environment.

Service virtualization reduces the risk of failure — while cutting costs

Service virtualization poses a more efficient and cost-effective approach to resolving test access constraints in situations where a dependent application is difficult to access and/or configure for dev/test purposes.

Service virtualization provides 24/7 access to the dependent application behavior that is required for development and testing. In addition to eliminating the access constraints that impede testing, it also significantly reduces the CapEx and OpEx associated with establishing, configuring, and maintaining test environments. Organizations leveraging service virtualization are able to conduct testing earlier, faster, more thoroughly, and more accurately—significantly reducing the risk of application failure.

These benefits reduce the overall burden on testers to setup, run and diagnose application tests while increasing test coverage and allowing testing to be done sooner, more comprehensively.