Part of what separates the best software development companies from the rest is the depth of software testing they carry out on their software products. But, how do they do this? Learn in this high-level overview.

The benefits of testing are simple. Flush out defects, prevent bugs, reduce development costs, improve performance and prevent litigation. As developers of software testing, we fundamentally believe it should be baked into all phases of the software development process.

If defects were found, the fixes would most likely be costly and release dates would be pushed out—tossing away company credibility and stakeholder confidence. The result was increased costs and shrinking profits.

In this high-level overview of testing, we’ll put all the pieces of the software testing puzzle together. We’ll cover:

Testing can be defined as a process of analyzing a software item to detect the differences between existing and required conditions and to evaluate the features of the software item. In this process, we validate and verify that a software product or application does what it’s supposed to do. The system or its components are tested to ensure the software satisfies all specified requirements.

By executing the systems, we can identify any gaps, errors, or missing requirements in contrast with the actual requirements. No one wants the headaches of bug fixes, late deliveries, defects, or serious malfunctions resulting in damage or death.

The people who perform testing and develop testing processes vary greatly from one organization to another. Companies have different designations for people who test the software based on their experience and knowledge, so it depends on the process and the associated stakeholders of a project. Titles such as software quality assurance engineer and software developer are common. These are some general titles and their functions for testing.

QA engineer/software testers are responsible for flushing out defects. Many are experts with software and systems analysis, risk mitigation, and software-related issue prevention. They may have limited knowledge about the system, but they study the requirement documentation and conduct manual and automated tests. They create and execute test cases and report bugs. After development resolves the bugs, they test again.

Software developers may know the entire system—from beginning to end. They’re involved in the design, development, and testing of systems so they know all the guidelines and requirements. Additionally, they’re highly skilled in software development, including test automation.

Project lead/managers are responsible for the entire project—product quality, delivery time, and successful completion of the development cycle. When product issues arise, it’s the product manager who prioritizes the timeframes for resolving the issues.

End users are the stakeholder or customers. Beta testing is a pre-release version of the software, which helps ensure high-quality and customer satisfaction. Who best to determine if the product being delivered is in the trajectory to satisfy its acceptance.

System engineers design and architect the system from gathered requirements and concepts. Because of the body of knowledge, they possess on the system they define system-level test cases to be later realized by the QA team and/or software developers. Verification of requirements to test cases is also performed. In highly complex systems where modeling is used, tests through model execution of the logical and/or physical system design are often performed by system engineers.

When to Start Testing?

An early start to testing is best because it reduces costs as well as the time it takes to rework and produce a clean architectural design and error-free software. Every phase of the software development life cycle (SDLC) lends itself as an opportunity for testing, which is accomplished in different forms.

The requirements decomposition and architectural design phase further detail the system at another level of abstraction. Interfaces are defined and if modeling using SysML, UML, or other language is performed, testing the architecture through simulation to flush out design flaws is another vital task.

During this process, additional requirements are defined, including the test cases that verify and validate each of them. Additional decomposition takes place producing the detailed design.

When the handoff from system to software engineers takes place, developers will begin their implementation based on requirements. Here, software developers apply or should apply coding standards to ensure code quality. Static code analysis, which is a form of testing and at the earliest stages of the implementation phase, when it’s also the cheapest to fix, will find coding defects as well as safety and security issues. Unit testing will follow, and each realized unit test case must be linked back to the low-level requirements or test case it realizes.

As the implementation of the system evolves, the test cases defined earlier during the systems engineering process must be realized and executed against the system under development. Starting with unit testing, followed by integration testing, system testing, and acceptance testing. In addition, based on quality-of-service type of requirements, other test methods may need to be performed, like API testing, performance testing, stress testing, portability testing, usability testing, and so on.

What Are Software Testing Methodologies?

For example, in the waterfall model, formal testing is conducted in the testing phase, which begins once the development phase is completed. The waterfall model for testing works well for small, less complex projects. However, if requirements are not clearly defined at the start, it’s extremely difficult to go back and make changes in completed phases.

The waterfall model is popular with small projects because it has fewer processes and players to tend with, which can lead to faster project completion. However, bugs are found later in development, making them more expensive to fix.

The Agile model is different from the waterfall model and is best suited for larger development projects. Agile testing is an incremental model where testing is performed at the end of every increment or iteration. Additionally, the whole application is tested upon completion of the project. There’s less risk in the development process with the Agile model because each team member understands what has or has not been completed. The results of development projects are typically better with Agile when there’s a strong, experienced project manager who can make quick decisions.

Other SDLC models include the iterative model and the DevOps model. In the iterative model, developers create basic versions of the software, review and improve on the application in iterations—small steps. This is a good approach for extremely large applications that need to be completed quickly. Defects can be detected earlier, which means they can be less costly to resolve.

When taking a DevOps approach to testing, or continuous testing, there’s a collaboration with operations teams through the entire product life cycle. Through this collaboration, development, and operations teams don’t wait until the software is built or near completion to do testing. That means the software delivery process is faster, defects are detected earlier and are less expensive to resolve.

Continuous testing uses automated testing and automation tools as components of the software development pipeline to provide immediate feedback on any business risks that might exist. 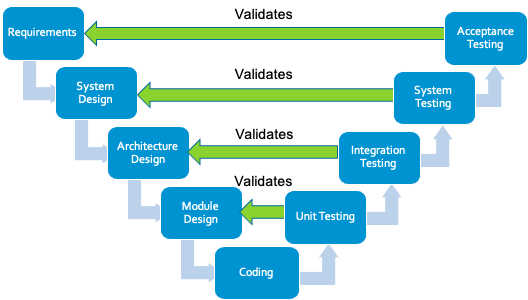 What Are the Types of Software Testing?

The most common types of software testing include:

Static analysis involves no dynamic execution of the software under test and can detect possible defects in an early stage, before running the program. Static analysis is done during or after coding and before executing unit tests. It can be executed by a code analysis engine to automatically “walk through” the source code and detect noncomplying rules, or lexical, syntactic, and even some semantic mistakes.

Learn how to choose a modern static analysis tool.

The goal of unit testing is to isolate each part of the program and show that individual parts are correct in terms of requirements and functionality.

Automate for faster and easier testing.

System testing tests the system as a whole where it is considered a black box and there is no need to understand the inner workings of the system under test. System testing is performed once all the components are integrated, the application as a whole is tested rigorously to see that it meets requirements. This type of testing is performed by the quality assurance testing team.

This is arguably the most important type of testing, as it is conducted by the quality assurance team will gauge whether the application meets the intended specifications and satisfies the client’s requirement. The QA team will have a set of pre-written scenarios and test cases that will be used to test the application.

By performing acceptance tests on an application, the testing team will deduce how the application will perform in production. There are also legal and contractual requirements for acceptance of the system.

When Is Testing Completed and Put to an End?

It’s difficult to determine when to stop testing, as testing is a never-ending process, and no one can claim that software is 100% tested. However, there are criteria to consider that can serve as indicators for putting a stop to testing.

How Does Parasoft Help With Testing?

The Essential Guide to Automated Test Generation for Embedded Systems