Creating a stable virtual representation to achieve a stateful behavior of your development workloads can be tricky. Here is how Parasoft Virtualize can help you simulate and test your virtual services.

In service virtualization, a critical part of creating realistic virtual services is ensuring that the service has stateful behavior so it can retain its state from test run to test run. But what is the limit? When does simulation become too much simulation? Let’s dive into state transition testing and how to know when you need it.

To accelerate functional testing, it’s essential to have unrestrained access to a trustworthy and realistic test environment. A complete test environment includes the application under test (AUT) and all of its dependent components (e.g. APIs, 3rd-party services, databases, applications, and other endpoints).

Service virtualization enables teams to (1) get access to that complete test environment they need, including all of the critical dependent system components, and (2) alter the behavior of those dependent components in ways that would be impossible with a staged test environment. Thus enabling teams to test earlier, faster, and more completely.

A critical part of creating realistic virtualized dependencies is having stateful behavior. In other words, a virtualized dependency that can retain its state from test run to test run. Consider an example of simulating a virtualized shopping cart component. A simple API allows for searching, adding, retrieving, and deleting items from the cart. With stateless behavior, simulating searching and saving items to the cart won’t change the state of the cart. Testing the processes of retrieving and deleting data from the cart will fail because the cart will remain in its initial state (empty), as illustrated below:

However, if the virtual shopping cart is given stateful behavior, where its state (empty or with one of more items in it) is retained from test to test, and also changes based on the inputs from the application under test, you can start to test the process meaningfully.

To summarize, to have trustworthy and reusable virtual services, it’s critical that they can mimic the real service sufficiently to provide meaningful results back to the application under test, and this can require stateful testing.

In addition to statefulness of the virtual service itself, you may also need to simulate changes in state based on different potential inputs, and this is called state transition testing.

What Is State Transition Testing?

State transitions are the action component of finite state machines, which are defined as:

“…an abstract machine that can be in exactly one of a finite number of states at any given time. The FSM can change from one state to another in response to some external inputs; the change from one state to another is called a transition. An FSM is defined by a list of its states, its initial state, and the conditions for each transition.” – Wikipedia 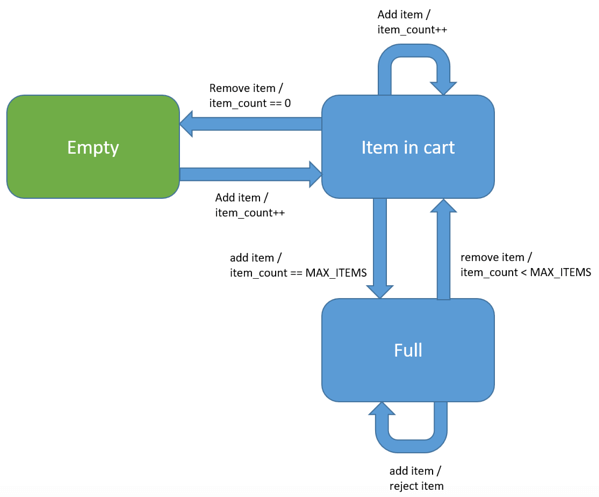 The initial state of the cart is empty, and as items are added to the cart, the state transitions from “Empty” to “Item in cart.” Transitions are initiated in response to events (in this case, adding or removing an item from the cart).

Transitions often have conditions before they are taken, for example, transitioning back to the Empty state only occurs when the number of items is zero again. Transitions often perform actions, such as incrementing the count of items in the cart, in this example. Although it’s unlikely that the cart is programmed as a state machine, there is an implicit one that is useful for defining its behavior.

Consider another simple example of a user login component that locks a user out after a certain amount of retries: 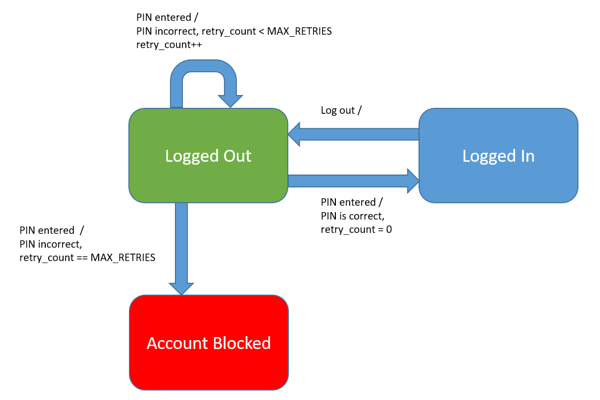 In the login component, the initial state is logged out. A user can only be logged in when a correct PIN is entered. After a defined number of login attempts (MAX_RETRIES) the account is blocked. In this case, Account Blocked can be considered a final state since there is now way to transition from it.

So, how does this help with testing and virtual services? Well, it’s possible to use Parasoft Virtualize to simulate stateful behavior so that services return appropriate responses from test run to test run, representing realistic values expected by the AUT.

Virtualized services react to input from testing, and persist values as needed, extending the usefulness of captured and simulated test data, which remain static unless enhanced with stateful behavior. In Parasoft Virtualize, a service is virtualized as “CRUD” (Create, Read, Update, Delete) to indicate that its test data source is persistent and can be manipulated as needed during testing. See screenshot below: 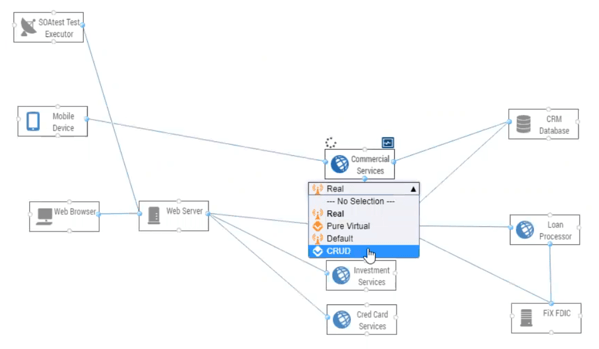 Parasoft Virtualize supports stateful behavior in the test data source (or engine) associated with each virtual service, which not only stores test data, but also provides the CRUD tool to manipulate data based on reacting to received API requests. These updates to data in the test date source are based on input events (like those discussed above in state transition diagrams – input event arrives, state transition occurs, action takes place).

To support all of this, the test data management tool in Parasoft Virtualize is configured to perform an update based on a data source and arriving event: 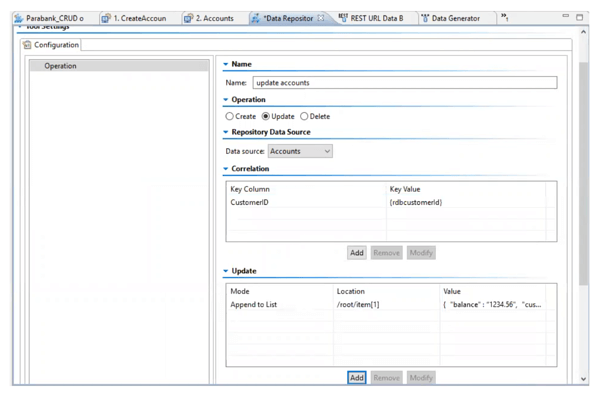 The updates to the test date source can be individual data items or entire objects. The tool also allows you to create and delete records depending on business rules required. In fact, it’s powerful enough to simulate complex behavior, which begs the question of, when is too much simulation, too much?

The Pros and Cons of Stateful Virtualization

Using pure virtualization is very helpful in testing, since it removes the complexity of dealing with a real service and isolates the application under test. In addition, removing live services means tests can be run in parallel, on multiple desktops at the same time, without impacting production systems or the need for a dedicated copy of the service. But a pure virtual server only returns acknowledgement as in “yes, this API was called.” In many cases, this is sufficient, until, of course, it isn’t. As more complex use cases emerge, we need our virtualized servers to “smarten up.”

Using the shopping cart example from above, it’s much more useful for your virtual shopping service to not only acknowledge that items have been added to the cart but actually simulate adding items to the cart. This way, a query to determine number of items in the cart will succeed with a correct value. We could also simulate a “cart full” state as described in the state machine representation above. Stateful behavior is necessary to give our tests more meaningful results and increased coverage of use cases.

But there comes a point where simulating business logic becomes too complex. The intent of virtualization is to decrease work and increase productivity, so there’s diminishing returns in simulating complexity. The cutoff is hard to say, but if complexity is going well beyond our shopping cart or login example, then it becomes hard to justify the effort. How are you sure you are simulating the correct behavior? You don’t want a situation where your application is built to work with a simulated service but incorrectly with the real thing! The use of live services are still needed in validation (luckily, Parasoft’s Environment Manager module makes switching easy).

Stateful behavior is a critical part of creating realistic virtualized services, needed to help isolate applications under test. The ability to retain the test data state from test to test is necessary for more realistic and useful tests. Parasoft Virtualize provides a comprehensive test data management solution that gives life to virtualized services with stateful and state-based responses to inputs from API calls.

Simulation should be used cautiously, as simulating complex business logic has diminishing returns, with risks of straying too far from the “real thing.” A smart use of simulation pays great benefits in isolation, which in turn decouples the dependencies on live servers; however, since live servers still play a role in final validation, service virtualization tools like Parasoft Virtualize are required to seamlessly support mixing and matching of these environments.

How to Choose the Right Service Virtualization Tool