Punycode attacks are phishing attacks that use domains to imitate popular brands. In this post, we analyze the high-severity Punycode vulnerability, CVE-2022-3602.

OpenSSL is a library for creating and maintaining the identity and secure communication between computers by providing a secure sockets layer and related tools. It is widely deployed on both Windows and Linux/Unix systems along with a wide variety of embedded platforms.

In OpenSSL v3.0.6’s crypto/punycode.c there exists an off by one error on line 184 where if (written_out > max_out) should instead be if (written_out >=max_out). When OpenSSL tries to process a certificate containing a crafted email address with a Punycode domain, the resulting buffer overflow can result in a program crash or remote code execution.

First, we’ll set up our Windows 10 “victim” virtual machine. In order to build OpenSSL from the source we need to install Visual Studio 2022 and Parasoft Insure++. Additional prerequisites include ‘Strawberry Perl’, NASM and ‘Git for Windows’ should also be installed and included on the Windows PATH.

Next, we’ll clone the OpenSSL git repository from github.com/openssl/openssl.git and check out the vulnerable version tag using the following command.

After this, we need to modify the build configurations to create a build profile that will use Insure++ to instrument OpenSSL as it builds. To do this, we’ll inherit from the Visual C Windows 64-bit build profile making a few small modifications for Insure++. Open Configurations/10-main.conf and insert the following after line 1421.

Now launch an “x64 Native Tools Command Prompt for VS 2022” and navigate to where you cloned the OpenSSL source git repository. Run the following command to configure the source for our Insure++ build profile.

If the previous command succeeded, we’re ready to build using the next command. This will build OpenSSL using Visual Studio while Insure++ instruments the generated code.

You’ll be able to see the code being compiled in the Insure++ GUI as seen in the following picture. 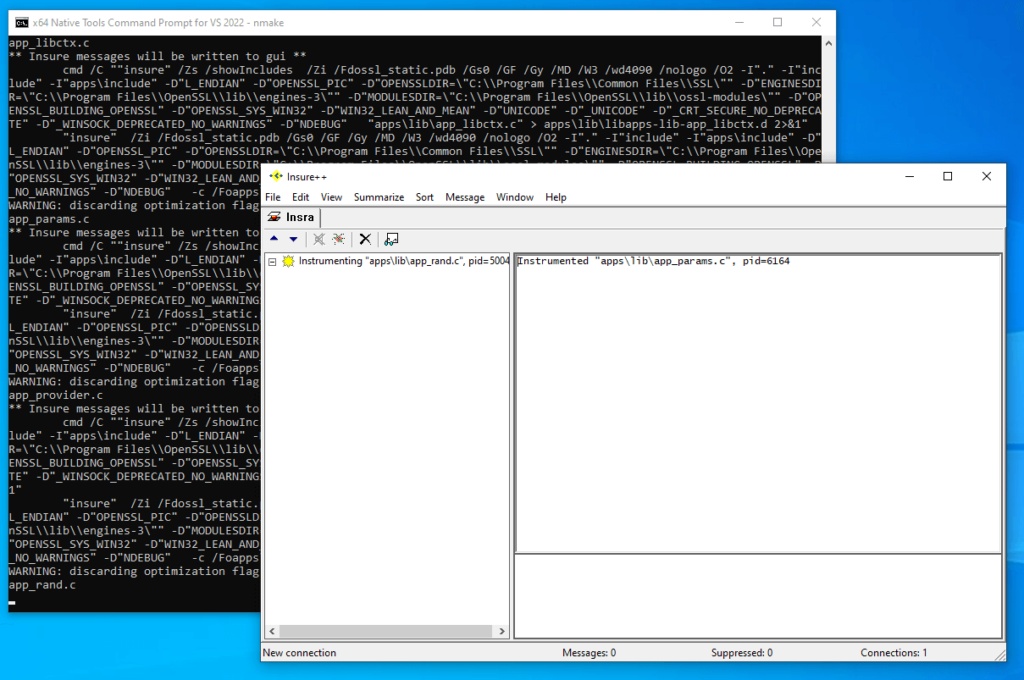 If the build succeeded we are done configuring our “victim” virtual machine. For the “attacker” virtual machine, simply install Ubuntu and clone the proof of concept git repository from github.com/DataDog/security-labs-pocs.git.

On the “attacker” virtual machine, from the root of the Data Dog Security Labs Proof of Concepts repository we cloned, navigate to proof-of-concept-exploits/openssl-punycode-vulnerability/vagrant/WindowsCrash. In this directory, there are crafted certificates and keys that will reproduce the vulnerability when a OpenSSL server is launched with them. It’s not required to have a vulnerable version of OpenSSL to use these files so we’ll launch an OpenSSL server using the version that comes with Ubuntu. The following command will launch an OpenSSL server with the proof of concept keys and certificates.

When the “victim” client connects to the “attacker” server, Insure++ will detect the memory write overflow and display it in the GUI as seen in the following image.

Analyzing the Vulnerability With Insure++

As seen in the previous image, Insure++ detected a variety of memory issues from this run of OpenSSL. Let’s focus in particular on the defect related to this Punycode vulnerability. In the Insure++ GUI, click on the WRITE_OVERFLOW= in=punycode.c on like 187. You should see something similar to the following.

You can see that Insure++ has properly identified the weakness as CWE-120, which matches the entry for CVE-2022-3602 in the NIST entry. Beneath this, we can see a graph showing that of our original 2048 byte buffer, the call to memmove() writes 12 bytes to the end of the buffer of which 8 bytes are within the buffer and the last 4 bytes overflow. This finding agrees with the results published in the aforementioned Data Dogs Security Labs blog. The exact address ranges involved are shown below this. Finally, you can see a stack trace and code snippet in the window.

I hope I have demonstrated some of Insure++’s unique features and abilities along with our new GUI. These features make Insure++ a great addition to a security researcher’s tools, especially when working with fuzzing, vulnerability research, and memory-based attacks.