Since penetration testing is expensive and can take a long time to run, we must perform API security testing in a way that is scalable and sustainable.

Discussing API security and why we should care is a little bit like talking about eating our vegetables. We all know that eating our vegetables is good for our health, but how many of us actually do it? Application security is a little bit like that. While it’s essential for the health of our applications and our businesses, striving for it isn’t nearly as interesting as building cool new application features. But we only have to look at recent news headlines to understand how important it is.

Traditionally, validating an application or API for security has been done at the end of the development process. This is inherently problematic, though. It’s usually too late in the process for discovered errors to be fixed: it may be too close to the release date to fix the problems, or the team might have moved on to other projects, or the architecture of the application might be inherently insecure.

In addition, services and applications today are released more often than ever, often releasing up to multiple times a day. This fast release cadence makes the traditional approach untenable. In this blog I’ll review a step-by-step API security checklist to make API security testing an automated part of the CI process.

To solve this problem, we will turn to a solution that the industry has been using to tackle software quality problems with accelerated release cycles—continuous integration. Continuous integration produces builds whenever new code is checked in and validates the new code by running static analysis and unit tests for each build. If teams are sophisticated, they might even be creating and running automated functional tests using CI (perhaps not for every build, since functional tests typically take a long time to run, but at least at specified intervals like once a day).

We can apply this same solution to automated security testing for our APIs by bringing penetration testing into our CI workflows. This will ensure that we test for security vulnerabilities sooner, and it will give us security regression tests that can catch new problems as soon as they are introduced. But we will need to be smart about it since penetration testing is expensive and can take a long time to run. We must do it in a way that is scalable and sustainable.

Let me describe how this works using Parasoft SOAtest and its built-in penetration testing support, which is included in the 2021.2 release.

To start, let’s assume we have a SOAtest scenario with 1 setup test that cleans the database, and 3 tests that make 3 different API calls. We want to perform penetration testing for each of the 3 APIs that are being called in the scenario: 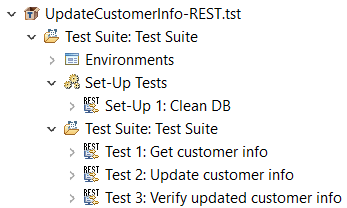 We will first prepare the scenario for security by adding a Penetration Testing Tool to each of the tests in the scenario: 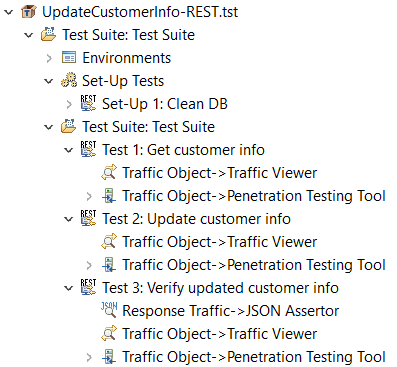 We will then execute this scenario using SOAtest. As each test executes, SOAtest will make the API call defined in the test and capture the request and response traffic. The Penetration Testing Tool on each test will pass the traffic data to an embedded instance of the OWASP ZAP penetration testing tool, which will perform penetration testing on the API based on the API parameters it observes in the traffic data, using its own heuristics.

The Penetration Testing Tool will then report any errors found associated with the test that accessed the API. Here’s a sample SOAtest report with all errors organized by CWE and by severity: 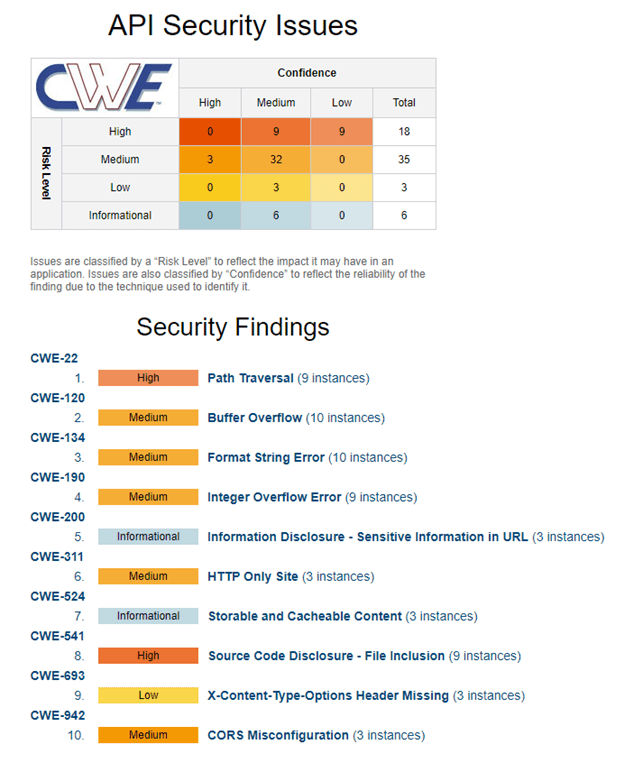 SOAtest results can be further reported into DTP, Parasoft’s reporting and analytics dashboard, for additional reporting capabilities. Here’s a representation of how this works: 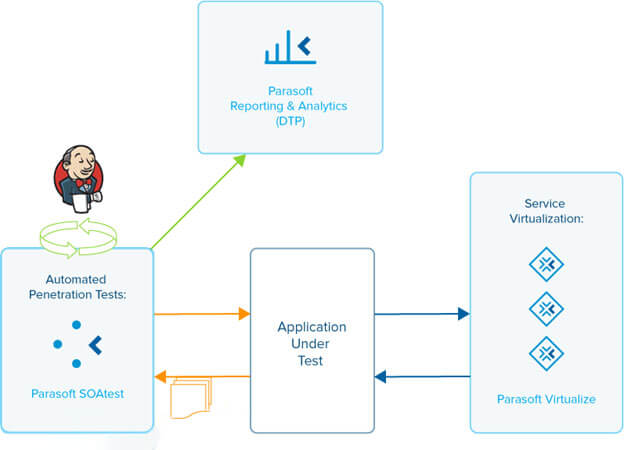 Repurposing functional tests for use as security tests gives the following benefits:

Preparing Functional Tests for Use as Security Tests

There are a few things to consider when repurposing functional tests for use as penetration tests:

Our APIs may also depend on other APIs outside our control. We can consider using service virtualization to isolate our environment so we don’t depend on those external systems. This will help to stabilize our tests while at the same time preventing unintended consequences to the external systems due to our penetration testing efforts.

Fulfill all of your API testing needs, from simple to complex, all without scripting.

We can ensure better quality in our APIs by moving security testing into development and QA as part of an automated process. We can leverage our existing API functional tests to create automated security tests, which will allow us to discover and fix security errors earlier in the process. And hopefully, this will help us not become one of the next big headlines in the news.

Nathan is Director of Development at Parasoft. He and his teams develop product capabilities in the areas of UI testing (Selenic), API testing (SOAtest), service virtualization (Virtualize), and unit testing (Jtest). He has been with Parasoft since 2000.