For more information about these updates, read below, or scroll all the way down to the bottom to watch a video that summarizes what we did.

Parasoft wrote the book on continuous testing (literally). Many years ago, Parasoft realized the need to automate as much of the testing process as possible. This not only includes the creation and execution of end-to-end API, web, and mobile tests, but also the automation of the feedback process around the testing results.

With this latest release, we extended support for DevOps by building plug-ins designed to facilitate the automatic go or no-go decisions required for true continuous testing. The new Parasoft Findings plug-in parses test results from your automated test executions back into common CI platforms, such as Bamboo, Jenkins, Team City, and Microsoft VSTS. These test results can be used to pass or fail the build, with specific information indicating exactly what happened under the hood. This helps to accelerate the testing process because you don’t have to go searching for test results and instantly know your level of release readiness. 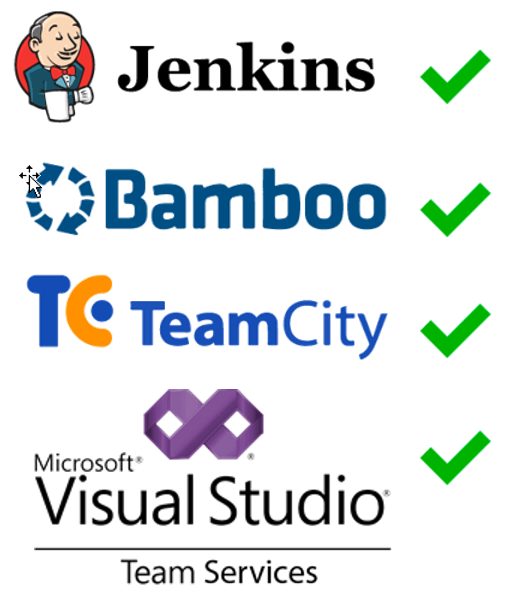 Parasoft has long had the ability to integrate directly into all automation engines. From the beginning, we developed a very powerful REST API that can be used for things like test execution, deploying assets, and retrieving test results.

On Parasoft’s marketplace, a utility allows you to kick off SOAtest test executions on any remote SOAtest server. This allows you to call SOAtest from within your build system and easily pass arguments such as which environment to use and which test cases to execute.

Once these tests have executed, you will want the results and more importantly, you will want to integrate those results into your build system. This is where the Parasoft Findings plugin comes in. We have created CI-specific plugins that make it easy to accomplish automated go or no-go decisions.

Parasoft Findings creates a post-test-execution step that integrates your build project with Parasoft functional and unit test results. Parasoft SOAtest 9.x, C/C++test, Jtest, and dotTEST are supported. The plugin collects test results from the Parasoft report XML and displays the passed/failed test indications and result details. The results can also be displayed as trending data in graph form for additional analysis.

The ability to quickly react to new and emerging technologies is what makes development so exciting. Every day, new ways of doing business are showing up, and developers are ready and eager to take advantage of these new paradigms. The tricky part is that testers have to follow up and also support all of these initiatives, being able to quickly react and create test cases that can test an application from top-to-bottom regardless of the technology. This is one of the major advantages of using Parasoft testing solutions. They’ll do all the dirty work and you can just take advantage of the test technology. Parasoft is continuously improving its offering by adding in support for new and emerging technologies, and I think this is a particularly exciting one.

In this release, it’s now possible to realize Behavior Driven Development (BDD). BDD presents new and exciting opportunities for test case creation and development. The challenge is that most people don’t exactly know where to start.

BDD is the next evolution for test case creation. It simplifies the task of associating business requirements with test cases. BDD allows for human readable language to be translated into test cases, and Parasoft has made this possible through an intuitive integration between Cucumber and SOAtest. The new Cucumber extension utility will allow users to associate gherkin plain-text feature specifications with SOAtest test cases. Keeping in theme with the core Parasoft principle, this requires no scripting, ultimately allowing businesses to repurpose their existing test cases right into their BDD initiative.

Parasoft SOAtest and Virtualize have always been a key component of IoT testing. In a recent blog, we called out some of the challenges associated with building a test lab capable of supporting all of the different devices and cloud services. Using simulation is a powerful way to create an isolated dev test lab for your IoT development.

In this release, Parasoft has continued to expand its IoT offering with exciting new protocols:

Additionally, the MQTT extensions add the ability to communicate over the MQTT protocol. You can use the extensions on the client side to perform many tasks that you would see in typical communication patterns, such as subscribing to a topic, filtering, monitoring, and publishing: 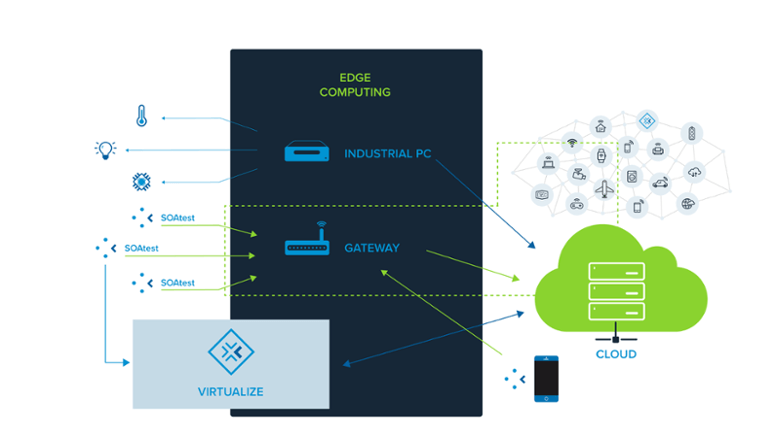 In our last release, we highlighted some particular ways to solve data challenges through our enhanced workflow. We have continued these efforts in this release by adding in a breath of new capabilities into the test data module of the Continuous Testing Platform. 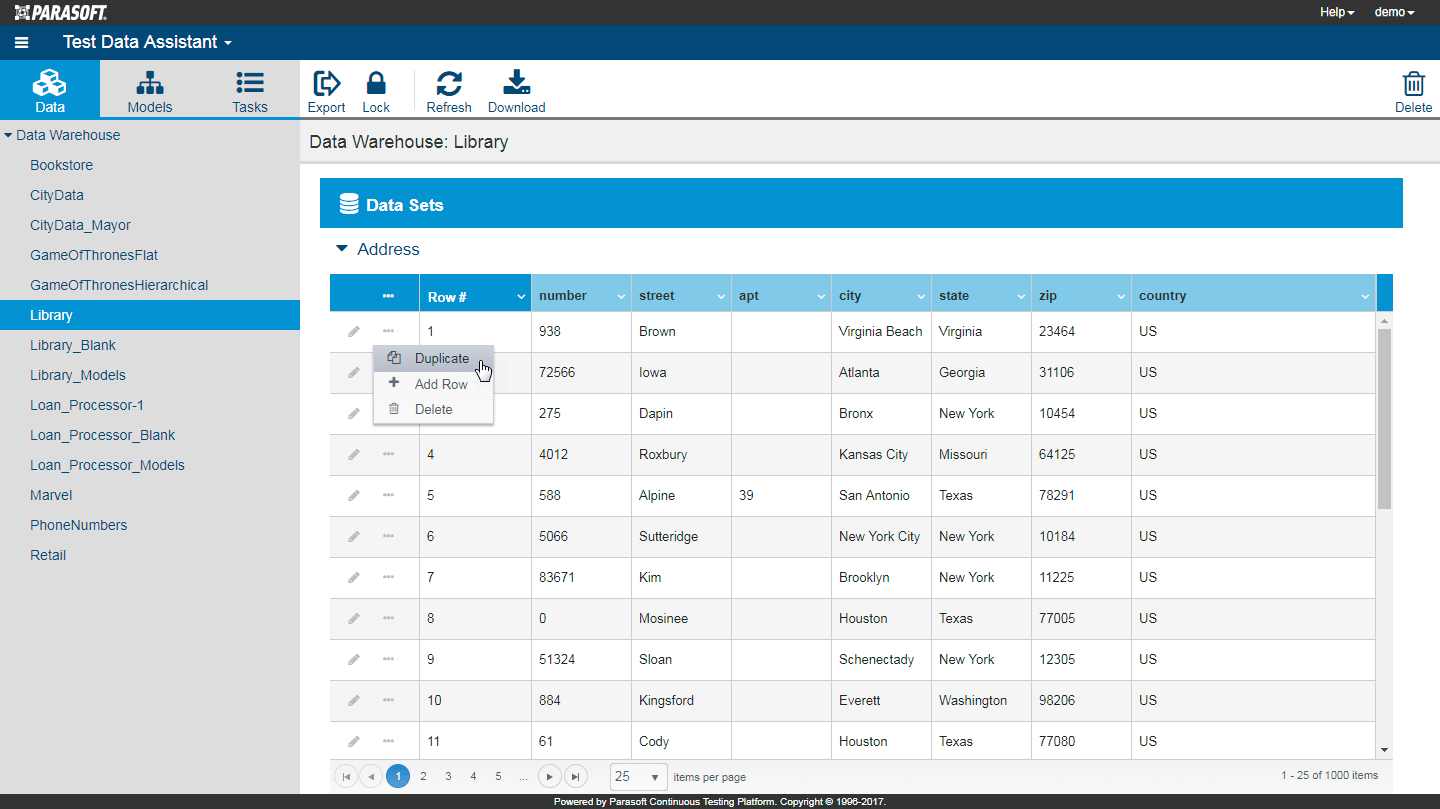 In this release we have focused on broadening the access to available test data in our thin client interface. Quite often during a testing initiative, the team that is creating the test is often not the same team that holds the data. We’ve supercharged many of the workflows in the web portal to allow greater access to create, manage, manipulate, copy and sort existing data, as well as import and export data from the data repository infrastructure to extend data coverage.

There were many additional enhancements to the Parasoft ecosystem that you can read about in the full release notes. Parasoft believes that one of the most paramount challenges facing test organizations today is building in automation and acceleration into every step of the SDLC. These product updates certainly speak to the promise of make developer and tester’s lives a little easier.

If you are an existing customer, I would encourage you to upgrade your infrastructure to get the latest and greatest features, by visiting the Parasoft Customer Portal. If you’re new to Parasoft, you can request a demo or even download the Parasoft Virtualize Community Edition for free and get started right away.

(Rather watch than read? Watch me explain it in the short video below.)