What Is GraphQL and How to Test it?

Achieving simplified GraphQL testing can be possible if you employ test automation. Read on to find out how Parasoft SOAtest simplifies the creation, management and orchestration of GraphQL test.

GraphQL is a query language for APIs that started at Facebook before being open-sourced in 2016. The simplification of queries and responses provided by GraphQL originated from usage within mobile applications, but it has general usefulness for simplifying the use of complex APIs while reducing the amount of data returned.

When the GraphQL project was originally created, it was built to solve a specific problem. In 2011, as most users were interfacing with applications from their browsers, we started to see a heavy migration from web servers to mobile. Particularly in Facebook’s case, this required calling multiple APIs from multiple different locations in the application. Depending on what the scenario was trying to achieve, those APIs would either deliver too much or too little information. So, to solve this challenge, the next thing Facebook did was try to create a way to simplify the delivery of information and reduce the total traffic that was required to accomplish their scenarios.

This gave birth to GraphQL. The technology was originally used in full by Facebook’s iOS mobile team and then proliferated to the rest of the mobile interfaces. Soon the vast majority of all mobile interactions were leveraging their GraphQL APIs. In 2015, Facebook announced the implementation, the world saw the advantages of using the technology, and rapid adoption ensued.

How to Test GraphQL API Implementations

GraphQL is an abstraction layer that exists between the front-end systems and the backend APIs making it essential to do testing. GraphQL queries allow you to access multiple resources in the backend and aggregate that data together into a single meaningful response.

Backend APIs are typically granular because we want to create new reusable building blocks for our applications; however, that doesn’t directly translate to our user stories or to the actions we want to be able to accomplish from the front-end. GraphQL is a way to simplify the interactions with your backend data, by using an interface whose schemas describe the system behavior so you can get efficient data from your APIs.

Each of the GraphQL schema’s map to functions. These functions will then make subsequent calls to the backend, according to your business logic, against your REST APIs, databases, and any other resources necessary to collect the data that was requested.

The functions will then assemble the necessary data into a response that will maintain the same shape as the request making it very easy to understand which data is associated to which elements in the request.

Ask for what you need,
get exactly that.

Additionally, GraphQL can be set up to call multiple backend services as it assembles its query response. This reduces the total time that a consumer needs to spend navigating through API docs to understand and read what information is available from a call.

There are many advantages GraphQL can provide over traditional REST API interfaces. Like most technology implementations, there is no silver bullet or one technology stack that’s better than another. But one of the reasons that GraphQL is gaining traction is because of its flexibility in retrieving information.

There’s nothing wrong with REST APIs. This is simply them working to allow us to build discrete actions that can be leveraged in many different ways. But in this particular case, in order to retrieve the information that I wanted, I had to make calls with a sequence of three APIs chained together. Additionally, if we think about the volume of data that was exchanged in this interaction for each of these API calls, we had to send the proper request and receive an entire response defined by the schema. In our case, I really only needed to deal with the three values of customer ID, account ID, and balance.

So, let’s see how this transaction would take place in the GraphQL world:

If you’re a veteran GraphQL user, please take that request with a grain of salt. I use it to illustrate that what would traditionally be accomplished with three API calls can be accomplished with one using GraphQL. The best part is it that it doesn’t require reimplementation of your existing functionality.

There are many additional pros and cons between REST and GraphQL, but it’s important to note that GraphQL and REST APIs are not mutually exclusive, and the adoption of one does not exclude the other. In fact, the two work quite harmoniously together. Whether you’re doing API testing, GraphQL testing, or load testing. GraphQL is something that should always be considered when looking at adding to your front-end resources.

GraphQL is a very powerful technology that will enable your API consumers to access their information in a more efficient way, but in order to ensure that the experience works the way you expect, you need to validate your GraphQL APIs. This is where test automation comes in.

There are many automation tools out there when deciding how to test your GraphQL APIs. I am going to provide you an example using Parasoft SOAtest, a widely used API testing solution that simplifies the often-daunting challenge of validating your critical APIs across multiple technologies. It supports a wide range of message formats and protocols and has had GraphQL support for a while now.

GraphQL endpoints accept queries (as strings) and returns JSON responses with the query results. This fits nicely with SOAtest, since queries can be made by REST clients to send the queries and validation can be done by existing JSON verification tools.

This same query can be created in Parasoft SOAtest as a REST client: 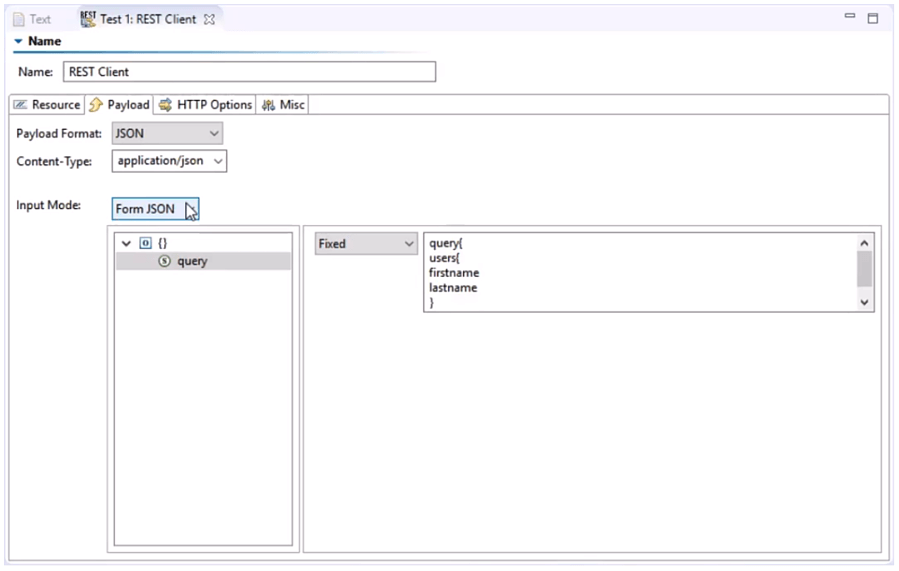 In SOAtest, the GraphQL queries are sent as a string named “query.” Responses are returned in JSON which SOAtest is readily able to interpret and represent in its traffic viewer: 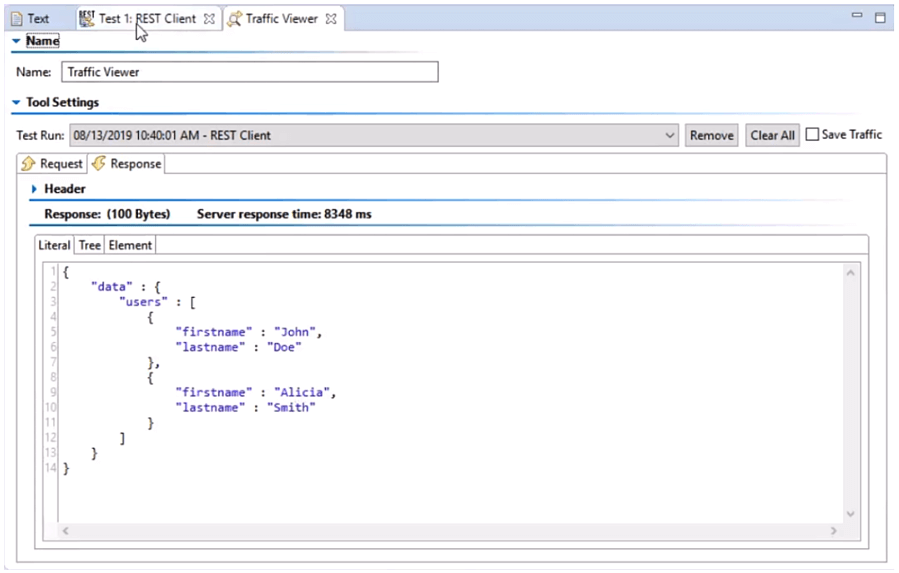 The returned values are expected. Obviously we need an automated way to verify these results and the SOAtest JSON assertor comes in handy here.

SOAtest verifies JSON responses using assertions that are configured with its JSON assertor tool. Here’s an example check to see if the first name returned is a string “Luis” (which we know is not a valid value.) 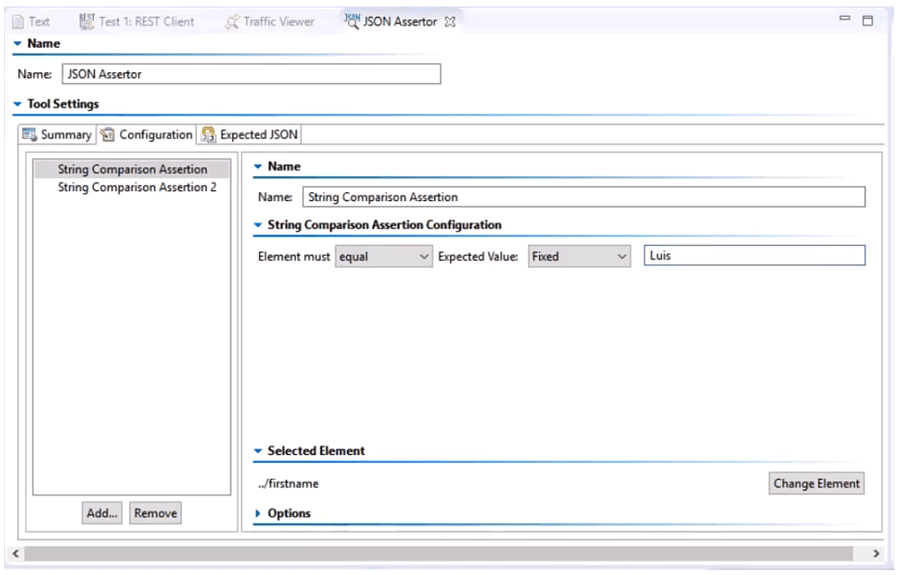 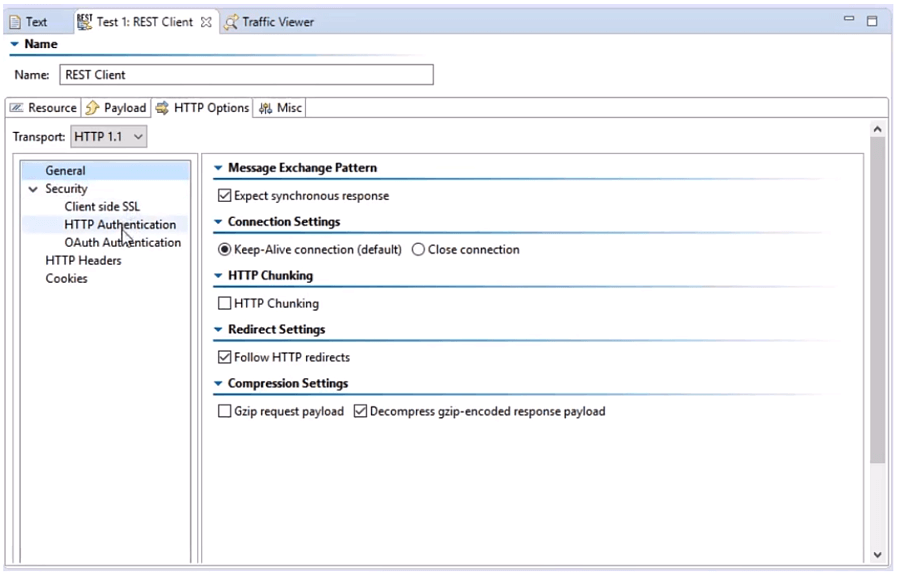 Why Parasoft SOAtest for GraphQL Testing?

The benefits that SOAtest brings to REST, SOAP, and other API testing remains the same for GraphQL. Designed to fit into an existing testing infrastructure, Parasoft SOAtest accelerates testing that enables agile development by helping testers work smarter, with script-less testing that facilitates collaboration across dev, test, performance, and security teams.

Take a look at this video, where we do just that:

See the leading API and UI functional testing solution powered by AI and ML in action.

How to Choose the Right API Testing Solution