Have you ever been stuck while configuring C/C++test 2020 in containerized environments? Here's a walkthrough of how you can do that and more.

How to Configure Parasoft C/C++test 2020.1 for Containerized Development Environments

The release of Parasoft C/C++test 2020.1 brings a collection of enhancements that make it easy to use with Docker containers. I’ll walk you through the steps to configure C/C++test 2020.1 to work in containerized development environments.

Containerized deployments of development tools are becoming the bread and butter of embedded development teams. Even though containers were initially developed to solve problems with the deployment of microservices and web-based applications, they recently gained popularity among embedded teams — especially big teams that use containers to manage complex toolchains.

When it comes to managing complex development environments, especially in the safety-critical space, teams usually struggle with the following challenges:

All these problems are easy to solve with containers. No wonder teams love containers! Let’s have a look at how to configure C/C++test for use in a containerized environment.

It’s easy to configure Parasoft C/C++test Professional to work with a compilation toolchain and the execution environment deployed in containers. We support deployments that are based on Linux and Docker containers. Here’s a high-level overview of how that type of setup looks:

As you can see, C/C++test accesses the containerized compiler (GNU GCC) and the runtime environments. In this specific setup, there are two separate Docker containers:

Let’s see how to configure C/C++test Professional to work with an in-container compilation toolchain and execution environment. In the example, we’ll use the latest GCC container image available via the Docker hub.

Let’s see how to configure C/C++test Professional to work with an in-container compilation toolchain and execution environment. In the example, we’ll use the latest GCC container image available via the Docker hub.

The following instructions assume you have a Docker engine correctly installed and configured in your environment. And the same for C/C++test Professional 2020.1. 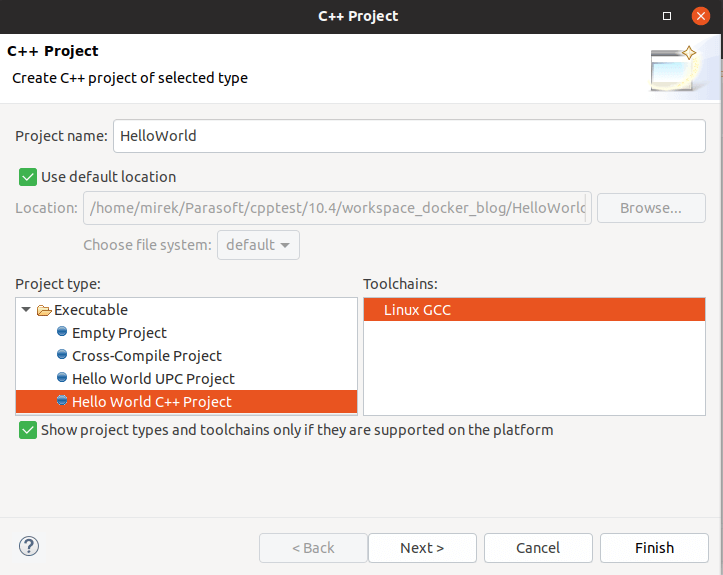 Once the project is created, modify a couple of items in the C/C++test Build Settings. 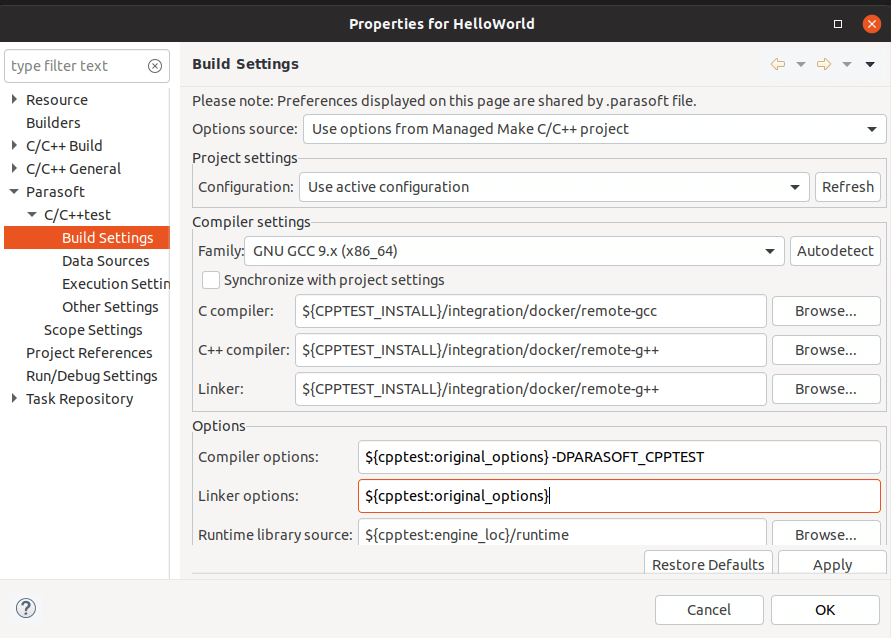 Step 4: Verify the Container Is Running

Make sure that the container with your compilation toolchain is up and running before using Parasoft C/C++test.

The compiler wrappers that we set up in the previous step are designed to execute the compiler commands in the running container, which is faster than starting the container for every invocation.

For CI/CD deployments, starting the container before C/C++test runs and stopping it after can be a part of the Jenkins job. In this example, we assume GUI base is used. We can create eclipse Run Configurations for this purpose. I suggest creating two configurations of “C/C++ Application” type and naming them as follows:

As shown in the screenshot below:

The interesting part of this command are -v options, which are used for mapping volumes.

The first -v option maps the local HOME directory to the container file system. The intention here is to enable access to the source code for the compiler operating inside the container and also for Parasoft C/C++test, which runs in the host operating system.

I’m using HOME in my example for convenience because I placed my workspace directly in HOME.

For real setups, you can strictly map only the part of the file system that contains the source tree and the eclipse workspace with project.

The second -v option maps the location of C/C++test installation directory to enable access to C/C++test header files inside the container.

Eclipse console should show you the hash of the container. To make sure everything is all right, you can switch to the command line and invoke the following command:

If you see our “gcc” container on the list, you’re good to start using C/C++test for testing your code.

You should see a new “tests” directory created inside your project with a single unit test created for the “main” function.

C/C++test should invoke a collection of in-container compilations and linking command lines, ending with a test binary creation and execution in the container.

That’s it! With these steps, you prepared Parasoft C/C++test to perform testing activities using the in-container compilation toolchain.

If you need to change the compiler for a project or modify something in the runtime execution environment, you can either update the container image or change it to a different version. (Remember to update the CPPTEST_CONTAINER_NAME variable.)

Stay tuned for Part 2 coming soon. I will explain how to create a container image with Parasoft C/C++test Standard.

See how containers and Parasoft C/C++test fit into your CI/CD pipeline and boost productivity.

The Value of Using a Unified C/C++ Testing Solution