How to Quickly Move From Manual to Automated Testing 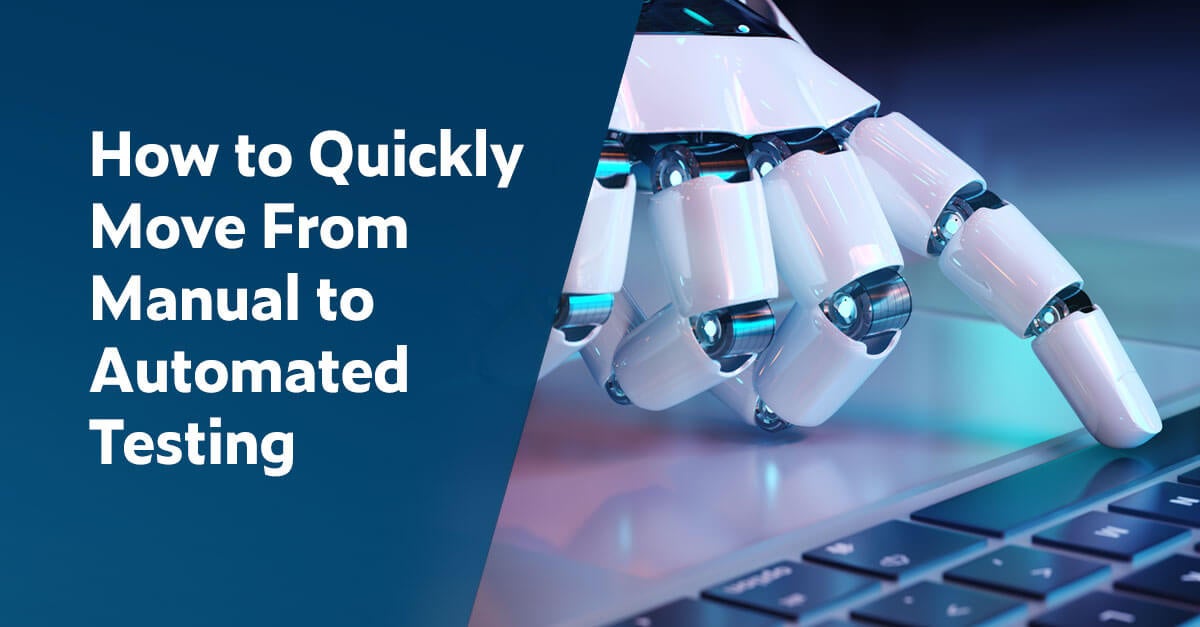 Every software organization has an end game in mind. It includes:

The reasons? To reduce costs, rework, and delivery times.

It’s also about releasing software with confidence that improves the customer experience with each update. That’s the dream, at least, but getting there is seen as an uphill battle.

Modernize Your Applications: Move From Manual Testing to CI/CD

What About All Your Manual Tests?

How can organizations reach their goals of automation and CI/CD when much of their application testing is done manually? Manual tests still rule the roost in many organizations with manual test plans that their testers follow step by step to methodically test functionality.

Tools like Selenium can automate these manual tests. While Selenium is a popular technology to help organizations on their journey toward automation, there’s a steep learning curve to use it and test maintenance (usually fixing tests after the UI changes) is time-consuming.

Even those organizations that have a mature Selenium practice find the tests brittle and prone to breakage. The return on investment is there with Selenium but it takes a concerted effort and dedication to the tool to reap the benefits.

The Possibility of Reusing What You Already Have

Wouldn’t it be great if you could simply record your current manual testing practices and automatically create robust Selenium tests? Then use these tests in a fully automated test suite integrated into your CI/CD pipeline?

Meanwhile, you could also keep an eye on test execution, self-heal tests that may have issues due to unexpected UI changes, and keep automation running smoothly. The answer should be a resounding “Yes!” But let’s put this on hold and come back to it in a moment.

The Complexities of APIs

Applications are not simply composed of web UIs. There are many moving parts that are leveraged on the backend to fulfill the functionality desired by interacting with the UI. These components or API layers can be complex, not only in themselves but also in the way they interact with one another to provide that desired functionality.

API testing is necessary but difficult. The ownership of their deep testing is often left for QA groups who don’t understand or don’t have exposure to their inner workings. Unfortunately, when something goes wrong, QA groups are left scratching their heads wondering where the problem lies. It’s often somewhere down in the bowels of one of the service layers.

The Value of API Testing

API testing is extremely valuable because it verifies essential individual service layers as well as complex interactions across services.

Wouldn’t it be great if you could take the same recording of your manual testing that you use to create and automate the Selenium tests to automatically build out automated API tests?

This would effectively capture all the complex backend interactions in API service layers.

Wouldn’t it also be great to easily automate those API scenario tests as part of your CI/CD pipeline?

Your answers, as before, are likely a resounding “Yes!”

Guess what? You can do both.

It’s now possible to leverage your current manual test processes to automatically create both Selenium web UI tests and API scenario workflow tests while quickly and easily incorporating them into your CI/CD framework. So, you can automate UI and API testing while doing what you’re already doing!

Start by performing your normal manual UI testing on your application after initiating the Parasoft Recorder. 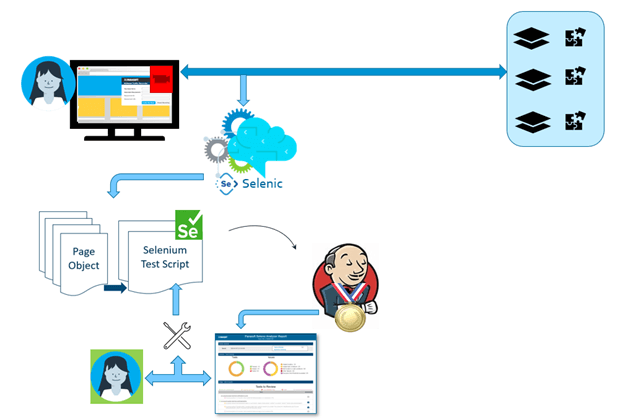 As you exercise your manual tests, Parasoft Selenic records the UI interactions via the Parasoft Recorder browser plugin and creates fully functional Selenium test scripts automatically. These recordings use the Page Object Model to be more resilient to UI changes.

In addition, if Parasoft Selenic detects runtime errors due to any locator or wait time issues while executing your Selenium CI/CD scripts, it uses AI to automatically heal them. 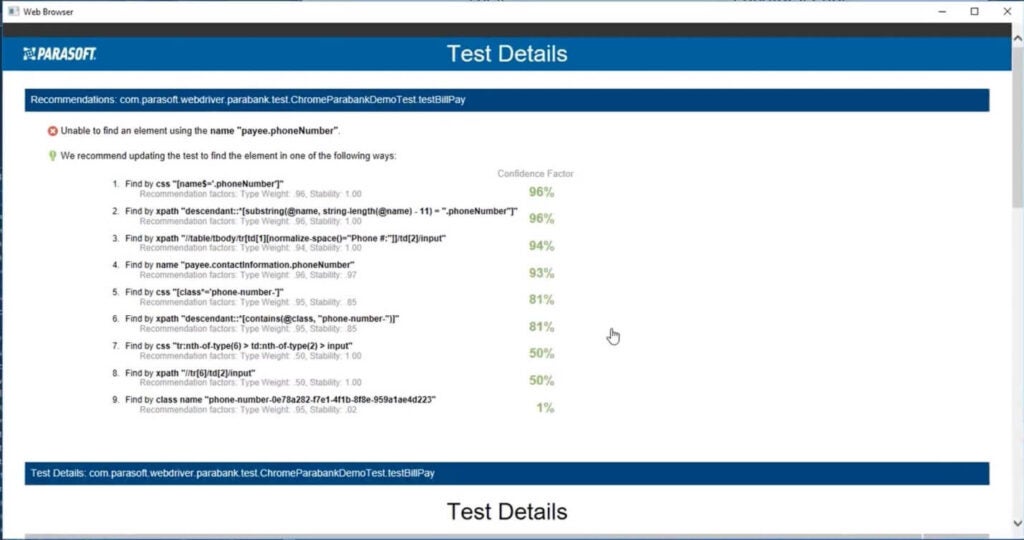 Fuse AI Into the CI/CD Pipeline to Optimize Selenium Testing

In general, a lot less maintenance is required for Selenium tests when automated with Parasoft Selenic. More details are provided for developers to check the automatic test healing and to intervene manually if required. You can also see runtime performance data to identify any potential issues early. 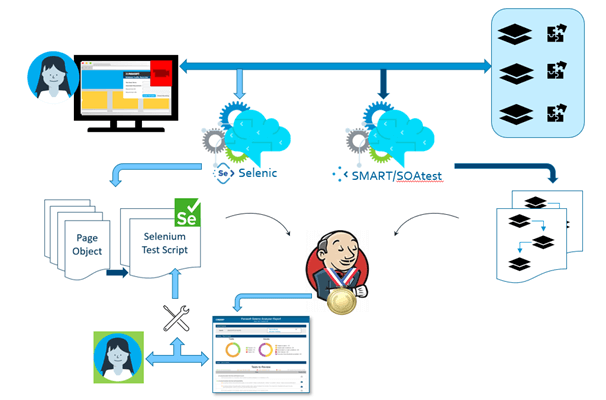 These API scenarios can be played back, edited, cloned, and reused to form a comprehensive API test suite. Parasoft SOAtest makes API testing easier to adopt, use, and maintain with automation and AI-backed decision its usability for nonfunctional requirements validation. This increases the overall application quality.

Implementing an automated CI/CD workflow using Parasoft delivers a huge reward. Test results and metrics collected along the way provide visibility and traceability to the quality state of your applications. Making decisions based on this data is the path to delivering with confidence. Without tracking test results and test/code coverage, it’s extremely difficult to tell if your product is truly ready for release. As part of your move to automation, analyzing the results from all the different points of automation is key to getting a clear picture of where you stand. 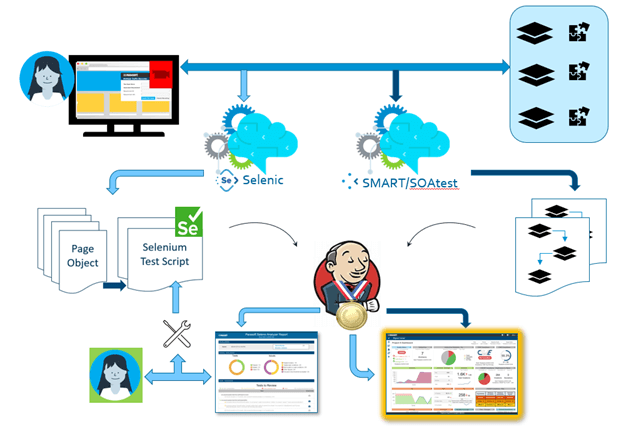 Each Parasoft DTP dashboard has a number of configurable widgets for tracking things like quality analytics and policy checks for the various data points collected across all testing practices such as static analysis, unit testing, code coverage, and UI and API testing (like we just discussed above), and much more.

Parasoft Selenic and Parasoft SOAtest are game-changers for removing the barriers to test automation. Both solutions provide a means to quickly accelerate teams in their quest to automate manual UI testing while also bootstrapping teams to quickly automate complex functional API testing.

The push by all organizations toward CI/CD is real and for great reason. Manual testing is slow, costly, and error-prone. The promises of DevOps can only be met if you can automate testing across the entire SDLC. Parasoft Selenic and Parasoft SOAtest, along with Parasoft DTP, provide the foundation for an organization to meet their goals of DevOps and CI/CD with visibility and traceability to the security and quality of their applications. Deliver quality software with confidence at speed.

Watch on Demand Now
Written by

Larry is VP of government and defense at Parasoft and brings 30+ years of expertise in the software development and testing industry. He works closely with DoD and major defense contractors on numerous programs including Joint Strike Fighter (JSF), the Navy’s DDG-1000, and many others. Larry ensures that U.S. government agencies and contractors are equipped to build and deliver extremely safe and secure software systems.