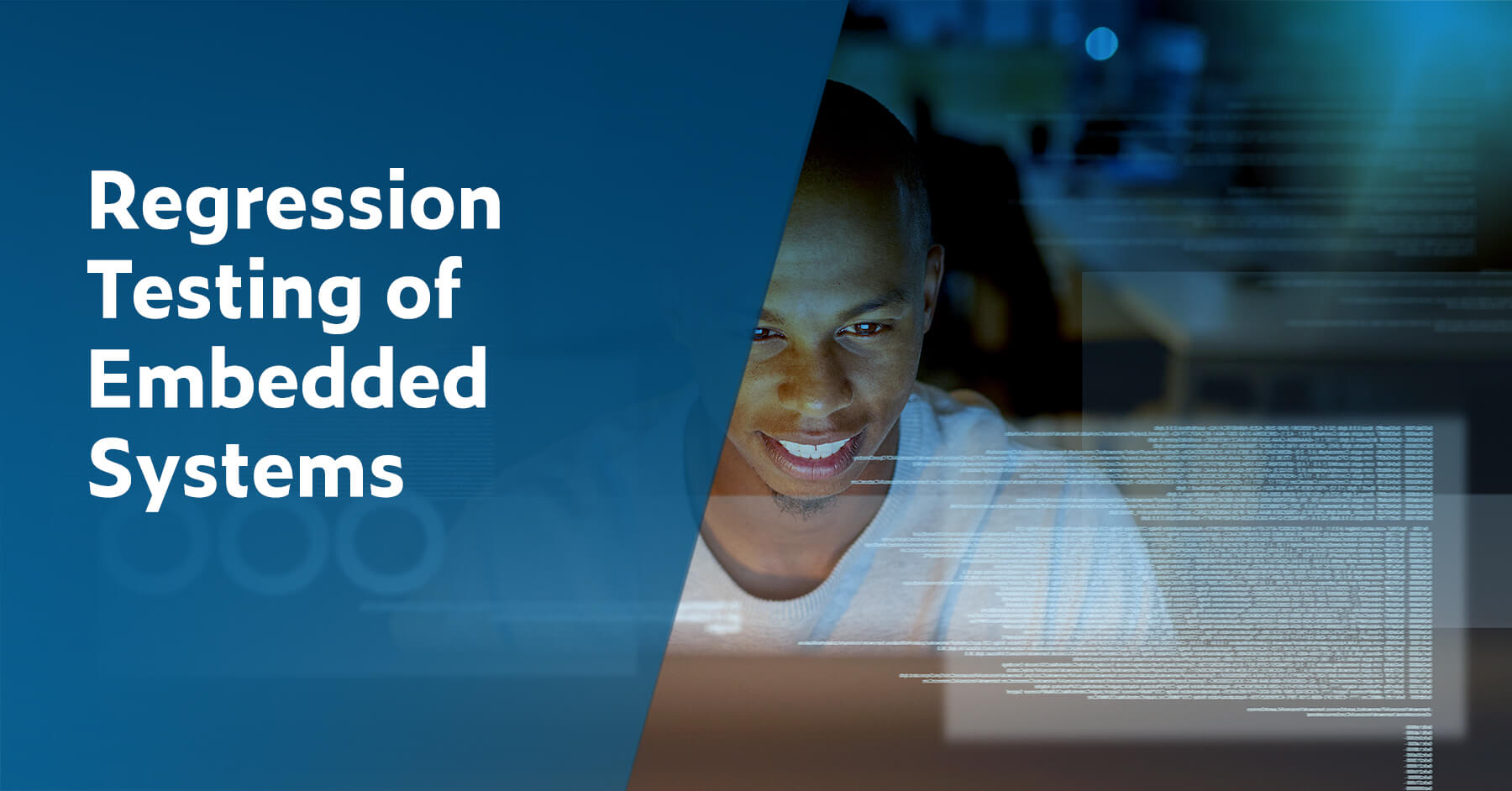 Development teams perform regression testing to verify that the code changes (fixing a bug or adding new functionality) in a software application don’t result in introducing another bug or breaking any of the existing system’s functionality.

For many, if not most embedded systems, teams perform regression testing at the end of the lifecycle to determine the stability of each software version release. This is an iterative process that continues until the project reaches the end of development or end of maintenance.

What Is Regression Testing?

A regression is “a trend or shift toward a lower or less than perfect state” — which is what we’re all trying to avoid as we develop software. Regression testing helps find defects that creep into our software as we add new features, fix bugs, and when making changes to the test cases themselves.

As part of most software development processes, developers perform regression testing after making changes to the software. These tests determine if the new changes had an impact on the existing operation of the software.

Regression tests are necessary, of course, but they only indicate that recent code changes have not caused tests to fail. There’s no assurance that the changes work themselves. In addition, the nature of the changes that motivate the need to do regression testing can go beyond the current application and include changes in hardware, operating system, and operating environment.

Why Regression Testing in Embedded Systems Is Important

If a previous unit test case passed and now fails, a potential regression may have been identified. New functionality could cause the failure. If this is the scenario, then the test case may need to be updated by taking into consideration changes in input and output values.

Both are critical because each new software system or subsystem release is built or developed upon its previous release. If you don’t have a solid foundation the whole thing can collapse.

Parasoft C/C++test captures the test results and identifies failures to analyze and fix. After this initial cycle, teams can reuse the existing test cases or test suite for regression testing.

Working on embedded systems adds another dimension to testing because it’s often preferable or required to perform testing on target hardware. Regression testing can be more challenging due to the complexity of initiating and observing tests on embedded targets. Add to that the limited access to target hardware that software teams have due to the high cost of these target systems.

So putting in place a reusable and configurable test automation solution that can seamlessly transition in a continuous way from execution on a host and/or a virtual system — and for verification and validation on the target system — provides significant savings in resources, time, and cost.

Development teams can use Parasoft C/C++test to execute unit tests on the host platform, target processor simulator, or the embedded target. Optimized to take minimal additional overhead for the binary footprint or process cycles, Parasoft C/C++test’s test harness comes in the form of source code. That means teams can customize for required platform-specific modifications. This is necessary because test results and code coverage data collection from the target system is essential for safety- and security-critical systems and required by the process standards like DO-178B/C, ISO 26262, IEC 62304, and more.

How to Decide What to Regression Test?

The key challenge with regression testing is determining what parts of an application to test. It’s not uncommon to default to running all regression tests when there’s doubt about the impacts of recent code changes. It’s that “all or nothing” approach. However, for large software projects, this becomes a huge undertaking and drags down the productivity of the team. This inability to focus testing hinders much of the benefits of iterative and continuous processes — potentially exacerbated in embedded software where test targets are a limited resource.

What is needed is a way to identify which tests need to be re-executed and focus the testing efforts (unit testing, automated functional testing, and manual testing) on validating the features and related code that are impacted by the most recent changes. Using a combination of Parasoft’s proprietary coverage analysis engines (C/C++test for C & C++, Jtest for Java, and dotTEST for C#) and the Process Intelligence Engine (PIE) within Parasoft DTP, developers and testers can understand the changes in the code base between builds, and with this improved efficiency, achieve the promise of Agile. This form of smart test execution is called test impact analysis (sometimes referred to as change based testing).

Test impact analysis uses data collected during test runs and changes in code between builds to determine which files changed and which specific tests touched those files. Parasoft’s analysis engine can analyze the delta between two builds and identify the subset of regression tests to execute. It also understands the dependencies on the units modified to determine what ripple effect the changes made on other units.

Parasoft C/C++test, Jtest, and dotTest provide insight into the impact of software changes and offer recommendations for where to add tests and where to run more regression tests. See the example change based testing report below.

Streamlining regression testing with test impact analysis lowers the overall burden of testing considerably. It enables developers and testers to focus solely on the impacted code and tests. The results?

Regression testing is no longer a burden but a key step in improving product quality and security. It generates metrics to help measure quality, security, and overall progress.

Doing regression testing early (shifting it to the left of the development timeline) means earlier detection of defects. Shifting left saves time and money immediately. It pays off even more later in the software lifecycle.

Don’t underestimate this payoff. It can save significant downstream costs. Finding defects earlier in the SDLC cuts the cost of fixing and reduces the impact on downstream activities. Check out the diagram below.

Regression testing is a core activity in embedded software testing. Each newly added feature, bug fix, or configuration change requires tests to confirm what already works and continues to work. However, as a project grows and software complexity grows, so does the number of regression tests.

Eventually, test automation becomes necessary to help deal with the testing burden. New technology such as smart test execution makes regression testing easier. It drives developers and testers to focus on tests that specifically test the changed and impacted code.

Combining process improvements like Agile, CI/CD, and DevOps with software test automation makes it possible to start regression testing almost as soon as code is written. It effectively shifts testing to the left and detects bugs earlier when they are cheaper and easier to fix.

View All Resources
Read Next Post "Can API Testing Add Efficiency Modifiers in the New Normal of COVID-19?"