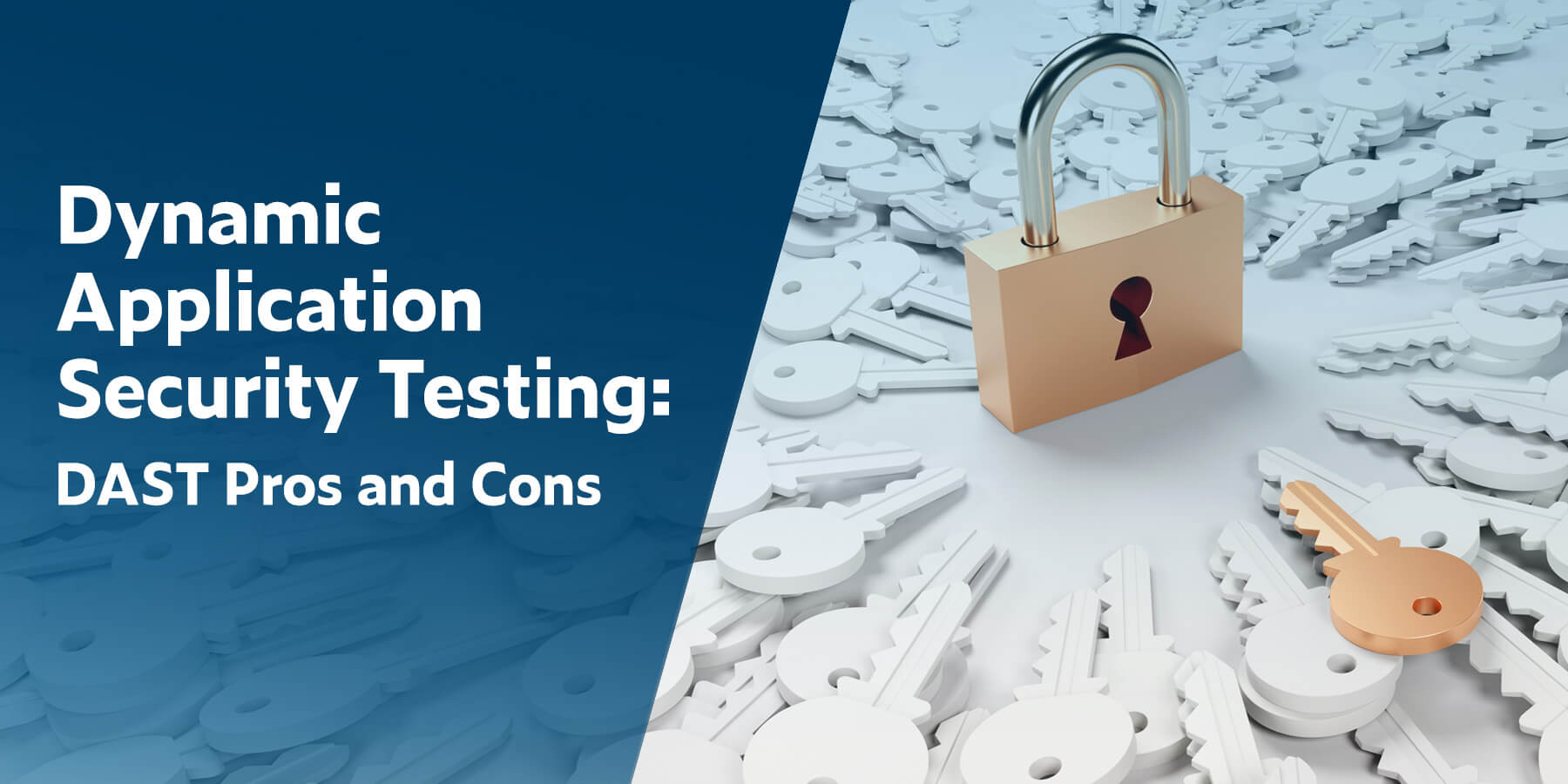 Dynamic application security testing (DAST) is a set of testing methods that software developers use to search for security vulnerabilities in applications by simulating malicious behaviors to identify weaknesses that could be exploited. In black box testing, DAST mimics the same types of external attacks that a hacker would attempt, but without any need for understanding or view of an application’s architecture or internal source code.

Sophisticated DAST tools can perform complex scans to detect a wide range of flaws to prevent security breaches like distributed denial of service (DDoS) attacks, cross-site scripting (XSS), SQL injections, and more. And while DAST is a powerful tool for cybersecurity, it can’t be used until closer to the end of the software development lifecycle (SDLC) because it needs a running build of an application before it can go to work.

During development and once an application is ready for testing by way of execution, one DAST approach can perform penetration testing and/or API testing in order to find flaws or vulnerabilities, so that these discovered issues can be put in a sprint for fixing. This helps DevOps engineers quickly address these issues before software is pushed out to the public. When combined with other forms of security testing like static application security testing (SAST), this provides a comprehensive testing strategy to help your team deliver safe, secure, and reliable software.

What Are the Advantages of Dynamic Application Security Testing?

Because a dynamic application security testing approach can imitate malicious user behavior, it’s able to show a business exactly how their applications behave in a live environment, pointing out risks early so a business can make the necessary repairs to prevent a successful attack. This methodology helps uncover problems that a development team didn’t think of or thought of as impossible to accomplish. You’d be surprised how many attacks work simply because nobody thought to block a path.

Hackers tend to enjoy exploiting a security flaw for as long as possible and keep their presence quiet, which may go unnoticed by the security team. By the time someone realizes an application has been breached, the damage is done. The attack could take the form of taking a system offline, or it could be more insidious as causing critical damages like revealing sensitive corporate or customer data or encrypting the data and holding it for ransom.

DAST is also able to find problems that other forms of testing can’t. Problems like server configuration and authentication issues, as well as obstacles after a known user is logged into a site. And because DAST methods test at the black box level and don’t rely on or care about source code, they can test any application and find problems missed by other tests such as authentication or server configuration issues. Better yet, DAST can easily help ensure compliance and simplify regulatory reporting.

The Limitations of DAST

While dynamic application security testing tools are helpful in preventing security issues, there are a few disadvantages worth being aware of. One drawback is that DAST can rely on security experts to create the right test procedures, it’s difficult to create comprehensive testing for every application. Along with that, DAST tools may create false-positive test results, recognizing a valid element of an application as a threat. False positives create more work for an analyst to determine whether or not DAST results are sound. And as false-positive results go up, test reliability goes down.

Another limitation with DAST tools is that they only point out that a problem exists, but it can’t identify problems within the code itself. With DAST on its own, developers may not easily know where to start looking to fix the problem. Also, DAST tools focus on requests and responses which can miss a fair bit of flaws hidden in the architectural design.

DAST typically runs at a fairly slow pace, taking days or weeks to complete testing. And because it happens late in the SDLC, identified issues can create a lot of tasks for the development teams, which extends timelines and increases costs. Also, since it can take days or weeks to complete testing, when problems are identified, more members within the project lifecycle teams are impacted. In some lengthy cases, developers may need to backtrack a bit and re-familiarize themselves with the older code before they can make the necessary repairs.

The Differences Between DAST and SAST

While DAST simulates malicious attacks and other external behaviors by searching for ways to exploit security vulnerabilities during runtime, SAST takes a developer’s point of view to testing. SAST analyzes every line of code without having to execute the application. Identified violations, allow testers to review them, and make corrections to the software design and/or implementation.

SAST can be performed as soon as software implementation starts because it looks at the source code itself to find coding rule violations that lead to security flaws. A running build of the software isn’t necessary for SAST to take place, and once you find code that’s been flagged, you can immediately begin triage. SAST also lowers costs by finding defects earlier in the SDLC, where it’s still quick and easy to make repairs.

What Is Static Application Security Testing and How Is SAST Used?

You could also easily use SAST on multiple different types of software applications and languages because the tools scan static code. Whether you’re coding in C or C++ for embedded systems, or languages like C#, VB.NET, Java, and others, SAST tools are a perfect companion for DAST, giving you the best of code compliance from the ground up, and a way to identify runtime problems.

What Are the Common Types of Software Vulnerabilities?

Cybercrime is a dirty game, and hackers will use every trick in the book to get past your security systems. However, there are some tried and true methods that criminals tend to prefer, giving us a way to predict and prevent malicious behavior. Let’s take a look at a few main paths of attack.

A SQL injection (SQLi) is among the oldest types of cyberattacks and one of the most dangerous vulnerabilities a web application can have. SQLi attacks target vulnerable user inputs within a web page or an application to execute malicious SQL statements and bypass security measures to access an entire SQL database and potentially add, modify, or delete records.

SQL injections are among the oldest and most dangerous vulnerabilities around, and they may be used to access sensitive trade secrets, customer information, personally identifiable information (PII), intellectual property (IP) and more. This kind of exposure can apply to any website or web application that uses SQL databases like MySQL, Oracle, SQL Server, or other popular options.

An XSS attack is a particularly nasty type of client-side code injection, allowing hackers to exploit known vulnerabilities and inject scripts into a web page, so an unsuspecting user gets malicious content delivered from a trusted source. An XSS attack can be used to bypass access controls like the same-origin policy, or role-based access control (RBAC), and can range from petty, low-impact activities to catastrophic system failures.

Hackers often use a DDoS to infiltrate an application by overloading it with traffic to disrupt services. It’s kind of like an artificial traffic jam created just to make it hard for people to get around. This type of attack usually targets prominent businesses like banks and other financial gateways, and it doesn’t take much scripting or coding knowledge to execute.

How to Use DAST and SAST Together to Optimize Testing

A combination of DAST and SAST tools offers you the best of both worlds in giving you a 360 view on software security and safety.

Improve your testing by combining SAST and DAST procedures.

SAST ensures that your code is compliant with the coding standard or standards that you adopt and employ. This is the first line of defense to writing secure code. Then DAST helps find those runtime behavioral vulnerabilities that you can’t uncover with SAST. Also, with DAST there are multiple testing methods used, like unit, integration, system, API and other testing methods that further ensure a secure application.

Sr. Technical Product Marketing Manager for Parasoft’s embedded testing solutions. He has expertise in the SDLC and test automation of embedded real-time, safety and security-critical applications, and software compliance to industry standards.