What Are Different Types of Tests for Microservices? 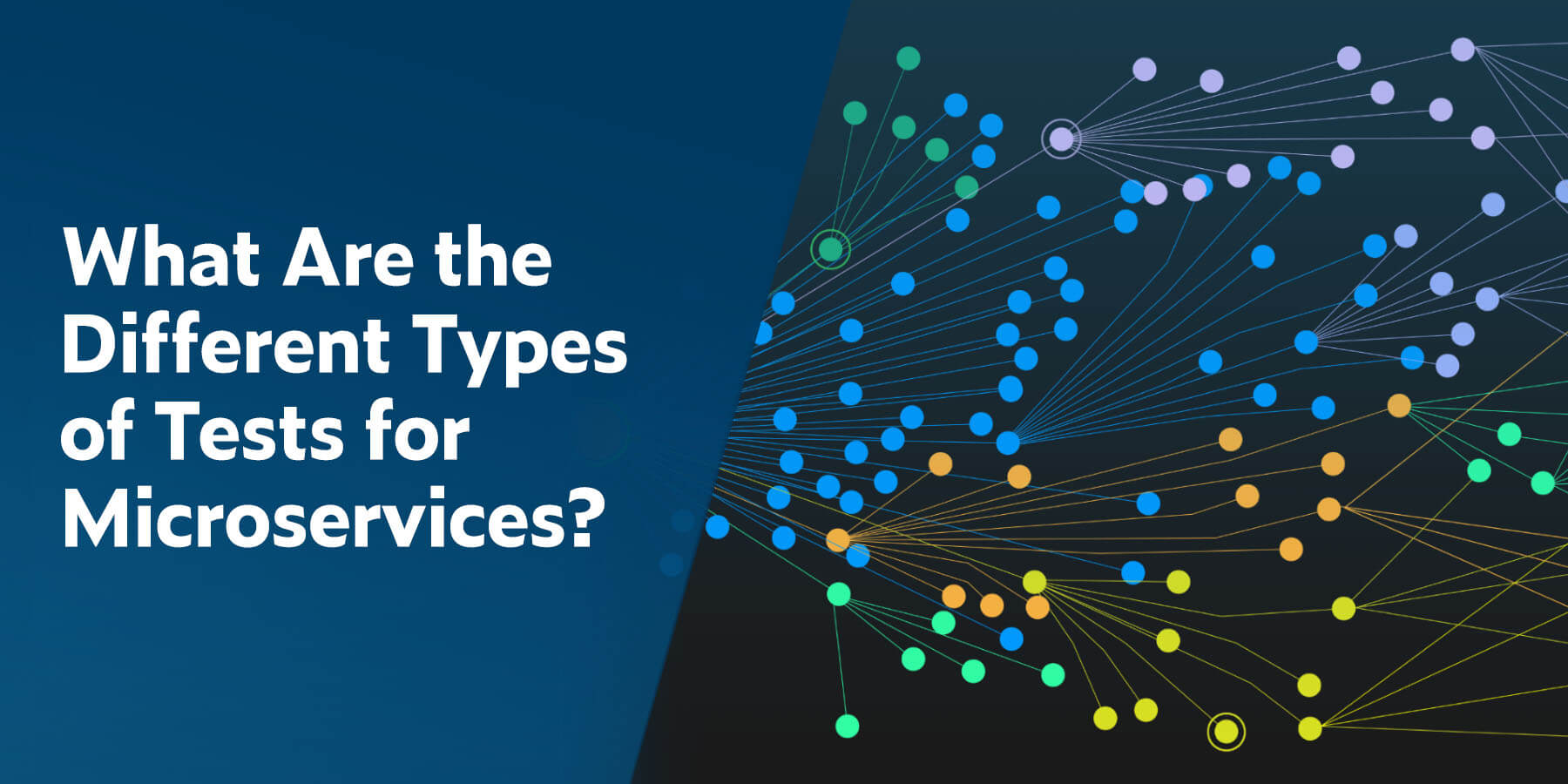 Thorough, accurate, and efficient methods of testing microservices are essential in today’s Internet and mobile app-oriented world. In this piece, we look at:

When a person interacts with a website or uses an app, numerous functions operate “below the surface.” When purchasing a product on Amazon, for example, you shop for the item, looking at price, size, color, and other options. Then make your selection and move to the checkout area.

From there, you choose delivery and payment options and finally complete the transaction. All the while, numerous microservices are operating. This includes your customer interaction but also the complex programming that is running unseen on the app or website, making the transaction seem seamless and easy.

Microservices is a programming architecture that allows developers to design flexible, highly scalable applications, such as the above example but also facilitating businesses and industries like healthcare, finance, insurance, telecommunications, IoT, and AI apps. This method decomposes an application, breaking it down into separate services (microservices) that execute specific functions.

Each microservice performs and connects with others, and communicates with them, using standard APIs (application programming interfaces). This allows developers to write services on various technologies using different languages. Thus, microservices are flexible and scalable. Furthermore, each microservice has a specific job to do and is therefore small and relatively simple. (The term microservice refers to the service’s singular function, not to its physical size.)

Developers like to use microservices architecture because of its modular characteristics, which makes it easier than monolithic architecture to develop and test. The widespread use of function-as-a-service and cloud-native, serverless deployments like Microsoft Azure Cloud Functions and AWS Lambda have created the ideal environment for microservices to thrive in today’s IT world. Microservices in these deployments allow for agility and faster delivery times.

In some ways, microservices, which incidentally have roots in monolithic architecture, came about in response to a need to address highly erratic user traffic. When developers partition application functions into separate services, the functions shrink or grow as needed to help ensure that enough processing power is available. This can get complicated when the application develops a constantly changing, dynamic network terrain of its own. As a result, rigorous functional testing is required.

In many respects, automatic testing of microservices is like the testing approach for applications that software developers have built on traditional architectures. Microservices employ familiar technologies like REST and message brokers for which software writers already use best practices and well-established testing tools during software development.

The special challenge that microservices present is the large number of services that comprise an application. Plus the fact that microservices are interdependent. An additional consideration is that these services must remain functioning even when other services they depend on are not available or do not respond properly.

When a developer needs to test the system, she or he can do so relatively easily because the microservices are separate, even though they work together. By contrast, when programmers build services on monoliths or monolithic architecture, the application code is inextricably linked, making testing difficult and slow.

To accomplish the basic tests mentioned above, developers employ the below.

An often overlooked practice when testing microservices is unit testing. These tests verify that the methods and classes developers write work as expected. While unit testing is a highly technical task for developers, a robust suite of unit tests provides a critical safety net for catching unintended consequences when developers change the code. And it pays dividends in alerting developers to exactly where in the code they’ve broken existing functionality.

This is a valuable practice for writing high-quality software. However, unit testing by itself isn’t enough. As an analogy, just because all the parts of an engine are machined to perfect specification doesn’t mean the engine will run and perform as expected.

In most cases, you’re testing a REST service. So you want automated tests that act as clients of the service, sending various positive and negative requests to the service and verifying the responses that the service returns.

One challenge is that it can be complex and difficult to test microservices in isolation because they often call many other microservices in order to reply to your test client’s request. To test one microservice, you potentially need dozens more deployed and available for your microservice to talk to test it properly.

Service virtualization comes to the rescue, allowing testers to simulate other microservices in order to test the microservice in isolation, thus simplifying the test environment and making test automation easier. This may involve stubs and test doubles. Think of service virtualization like hooking up an automobile engine in a lab to an artificial transmission so you can verify that it hooks up properly and delivers the expected power to the rest of the car without actually putting it in a car.

When using service virtualization to simplify and stabilize testing the microservice as an individual component, you also want to test that the microservice works with the other REAL microservices involved. Developers often do this at a “QA” or “integration” stage, where many of the required systems in the overall ecosystem are deployed and integrated together. With this testing practice, you’re beginning to assemble the car to make sure every part fits and works together but you’re not testing it on the road yet.

Also called system testing. At some point, a big web of microservices has entry points where the application’s end users interact. For example, a Netflix app on your Apple TV talks to microservices within Netflix’s data center. But they represent only a small portion of their core functionality, which are small, individual components responsible for specific things like a recommendations service, a video streaming service, an account details service, and so on. So this, too, is an opportunity for testing microservices.

Often it’s painfully slow and high maintenance to test these interactions automatically, whether web or mobile. For critical paths and user journeys, it’s a must, but being able to represent these complete or end-to-end transactions from the end user perspective as a sequence of microservice calls has many benefits.

You essentially strip away the UI and simulate all the API calls that the UI makes to your microservices architecture so you can verify that all microservices are working together correctly for the larger end user/business requirement context. You’re now driving the car on the road, putting yourself in the shoes of your customers, and ensuring the car delivers on its promises.

Summary Chart for Specific Types of Tests for Microservices

Besides unit and functional microservices testing, it’s important for developers to verify nonfunctional requirements as well. Specifically for security, load, and performance testing while employing the appropriate schema and metrics. Automated microservices testing software from Parasoft is your source for these, also.

Hackers can exploit areas under the microservices umbrella. Therefore, developers need to test microservices thoroughly so they are hardened against security vulnerabilities. Parasoft Jtest has static code analysis technology that scans the underlying source code and identifies secure coding weaknesses so developers can fix them. Parasoft also allows testers to repurpose the functional test cases they’ve written in SOAtest to perform penetration testing of the microservice.

To make sure the microservice is able to sustain the SLAs (service level agreements), developers need to understand how SLAs perform under load and also determine breaking points.

Parasoft SOAtest includes a module called Load Test that enables the tester to repurpose the functional tests he or she has written and execute them as a Load and Performance Test. This saves time by reusing what testers have already developed instead of “reinventing the wheel” and potentially using multiple tools.

Here are five tips to help you develop a microservices testing strategy. Bear in mind that these are suggestions. Like all types of testing plans, you need to consider your setup’s specifics.

The fundamentals of microservices testing are not new compared to traditional web services or SOA testing, but the importance of doing it has only become more critical in modern systems. Parasoft solutions cover the essential concerns of microservices testing, making software more secure, more efficient, less prone to crashes, and ultimately better in every respect. This can substantially improve workflows and reduce debugging efforts.

Reach out to the Parasoft team now for the powerful solutions your business deserves.

A senior solutions architect with expert-level knowledge across Parasoft’s entire suite of products, Wilhelm specializes in test automation strategies for open systems, web applications, and microservices, along with SOA for developers and functional and performance test engineers.

How to Tackle Software Testing & Regulatory Compliance for IEC 61508